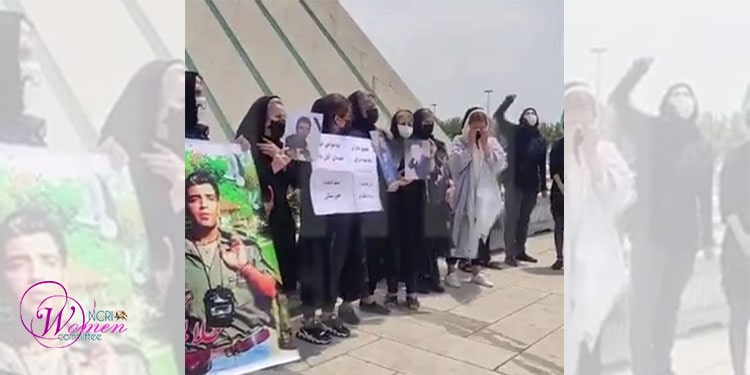 Mothers of the martyrs of November held a picket line in Tehran's Azadi Square.

Mothers of the martyrs of the November 2019 uprising held a picket line at Tehran’s Azadi Square to express their solidarity with the people of Khuzestan, especially with the mothers who have lost their children in the recent protests over water shortage in that province.

They chanted, “From Tehran to Khuzestan, Unite, Unite!” and “We are seeking our rights, we will hold hands until [the regime is] overthrown.”

The mothers of the martyrs of the November 2019 uprising marched in Azadi Avenue and then went to the Sadeghieh Metro Station and continued their calls for solidarity with the protests in Khuzestan. However, security forces arrested and brutalized the mothers and took them into custody in the Intelligence Police stations on Tehran’s Vozara Ave.

Following is an account of the incident as the wife of one of the November 2019 martyrs, Ali Fotouhi, narrated:

Today, we went along with the mothers to the Azadi Square to express support for Khuzestan, Sistan and Baluchestan, to seek justice for their children, for those who were killed in the Ukrainian plane. We had a placard and several photographs of our loved ones.

We went from Azadi Square to the Golshahr Metro Station and then we wanted to go to the Sadeghieh Square.

The metro station was crowded. Everyone was taking films. [The security forces] confiscated their cameras. The mother of Pejman Qolipour spoke out. They tried to silence her. When we got off the metro train, it seemed that they were waiting for us.

Two women caught the hands of Pejman’s mother. Farhad’s mother and I tried hard to separate her hands from them, but we could not. Then another two women joined them. So, there were four women who took Pejman’s mother by her hands and feet. Then they took away the mothers of Ebrahim [Ketabdar] and Vahid [Damvar]. The mother of Reza Mo’azzami had gone further down, but she returned towards us. They said, ‘she is with them, too.’ They arrested her, as well.

Several agents badly beat up the mother of Farhad [Mojaddam] and dragged her on the ground. Her shawl fell off. I went to help her get up. Once I helped her stand and she wanted to come up the stairs, but two agents did not allow me to go. Therefore, I came down. I saw Farhad’s mother was not feeling well. They had hurt her. I returned to help her, but two agents did not allow me. They told me to go and they would bring her.

Then I turned the other way and walked away. When I turned around, I did not see anyone behind me. I think I went in the wrong direction. They had taken away the mothers….

No one was there. I even looked for the persons who were accompanying us. But they had been arrested, too. They arrested Mrs. Ketabdar’s son. I think they used tear gas on them. They had arrested and taken away everybody. They broke the mobile phone of Mrs. Mojaddam and they took away the cellphone of Ebrahim [Ketabdar]’s mother.