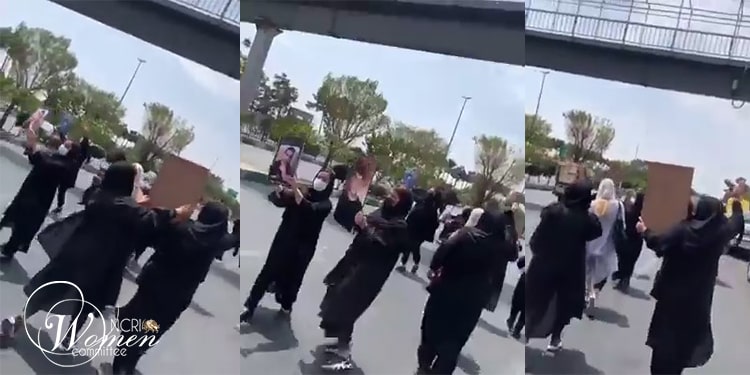 A group of mothers of the victims of the November 2019 uprising marched in solidarity with the people of Khuzestan in Tehran’s Azadi Square around noon, on Friday, July 30.

They chanted, “We are seeking our rights, we hold hands until the [regime’s] overthrow.” One of the mothers cried out: “Enough is enough! Enough with slavery!”

These bereaved mothers held photographs of the November 2019 martyrs as they marched in Azadi Avenue.

At 2.30 p.m., the mothers gathered in Tehran’s Sadeghieh Metro Station where they were arrested by security forces and brutalized. The security forces took them all to the basement and held them in custody.

The mothers of Milad Mohagheghi, Ebrahim Ketabdar, Pejman Qolipour, Farhad Mojdam, and Vahid Damvar, as well as the aunt of Sajjad Rezaii, and the sister of Hamid Rassouli are among those arrested.

Earlier these mothers had declared their support for and solidarity with the people of Khuzestan and their protests.