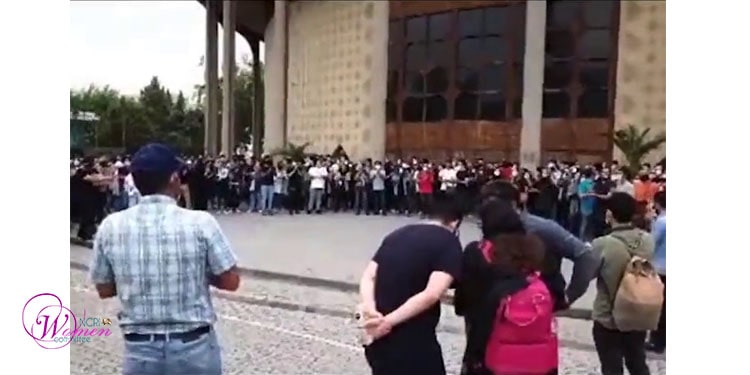 Young women and men in Tehran gathered Saturday evening, July 31, 2021, in the park of the City Theatre to express their solidarity with the Khuzestan uprising.

People, mostly young students, gathered in the park located at the Vali-Asr intersection. They chanted, “Iranians die but will not accept humiliation,” “From Khuzestan to Tehran, Unite, Unite,”  “Fellow compatriots support,” “Death to the dictator,” etc.

Security forces fired tear gas and bird shots to disperse the crowd. They brutalized some of the protesters and attempted to arrest them. However, the participants in the protest stood up to the repressive forces and defended the victims.

One of the video clips on this gathering shows a middle-aged woman defending a young woman against being arrested by a security force, and the crowd chants, “let her go!”

The people of the oil-rich Khuzestan Province, lying next to Karun and Karkheh rivers, are thirsty. They do not have potable water. Women and children suffer very much from a lack of drinking water. Farmers have no water for their lands and live stocks, many of whom have died.

Khuzestan is a very important province. Rich in resources, including oil, it has key ports in the Persian Gulf. It is the fifth most populated province with nearly 5 million populations and provides 15% of the GDP, second only after Tehran.

Many neighborhoods in the capital city of Ahvaz, as well as Susangerd, Hoveizeh, Mahshahr, Khorramshahr, Andimeshk, Dezful, Shush, Behbahan, Darkhovein, and izeh, have been the scenes of these escalating protests where people have been chanting slogans such as “we will not accept humiliation, death to Khamenei, death to the dictator.”