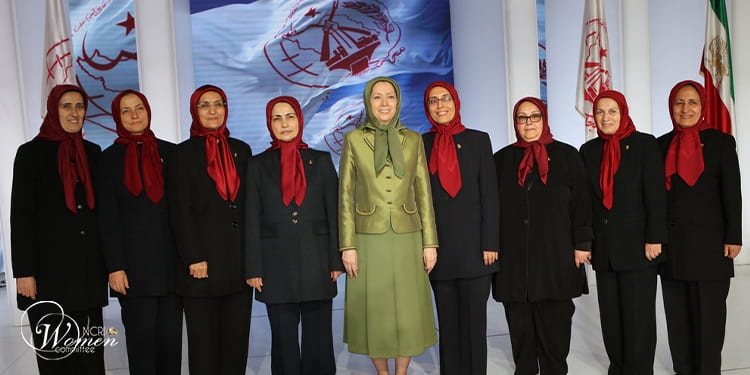 Secretary-Generals of the PMOI/MEK flank Iranian Resistance's President-elect Maryam Rajavi in the inauguration of Zahra Merrikhi, the organization's new Secretary-General in 2017

August 5, 1993, marks a milestone in the struggles of Iranian women, and the Iranian opposition, the PMOI/MEK which forms the backbone of the democratic alternative to the clerical regime, the National Council of Resistance of Iran (NCRI).

Twelve years after the beginning of the Iranian Resistance when Iranian women remained steadfast despite enduring tremendous suffering and torture in their struggle for freedom and democracy; and four years after Maryam Rajavi became the PMOI’s Secretary General in 1989, this long line of battle-tested women were recognized as best qualified to rise to the movement’s leadership.

As a result of the struggle of these pioneering women and their valuable achievements, the world witnessed the hegemonic role of Iranian women in the course of the 2009 uprising. In fact, three major elements steered women in that path: years of struggle for freedom and equality; the misogynist nature of the ruling regime; and the presence of an organized resistance with gender equality as its ideal.

The impact of women’s leadership and equal participation could also be seen in the 14-year steadfast perseverance of the PMOI/MEK in Iraq, beginning in 2003 when US invaded Iraq.

Women’s leadership, put to test 14 years in camps Ashraf and Liberty, succeeded in the face of great adversity with courage, endurance and respect for moral values. The men in this movement, who in their struggle against the male-dominated culture have reached great peaks of their own, also played a significant role in the campaign of perseverance owing to their progress in the realm of humanity.

The Leadership Council has now grown to become a 1,000-strong Central Council.

Indeed, women’s leadership could not become a lasting institution and tradition without the support of PMOI/MEK men who have faith in, and are committed to, the ideal of equality.

Today, as the social conditions in our homeland, Iran, is simmering with strong discontent, the message to Iran’s valiant young men is to rise up in defense of freedom and equality if they want to realize the Iranian people’s freedom.

The fact that women bear the brunt of repression in Iran, reveals the regime’s defensive tactic against the existential threat it feels from women. The imposition of the mandatory veil on women and flagrant discriminations against them in educational and vocational arenas are only efforts to enchain women.

Iranian women have proven their effective and growing role in the struggle against the mullahs’ religious tyranny, in the scenes of confrontation with the Revolutionary Guards, in their unprecedented resistance in the regime’s torture chambers and dungeons, through their presence in the first ranks of anti-regime demonstrations, in organizing the teachers and workers’ protests and protests by other social strata, in organizing and leading an international social and political movement against the religious fascism ruling Iran, and in their active assumption of responsibilities in the organized movement of the Iranian Resistance.