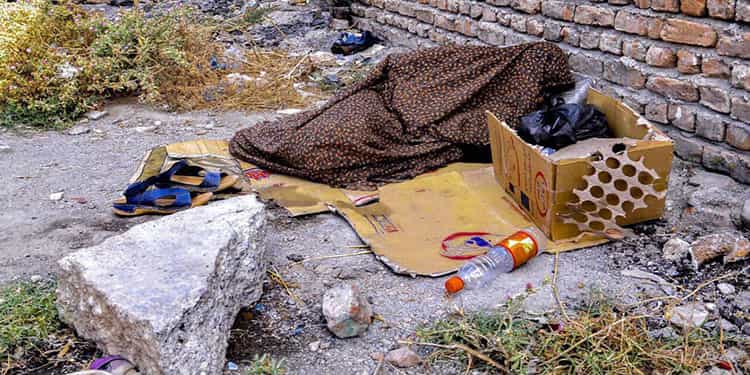 The looting and inefficiency of the mullahs’ regime in managing Iran’s resources as a rich country have led to poverty. All kinds of disasters and problems in Iran, including homeless women and girls, are the consequences of poverty.

Neda Mandani, Director of the Homeless Iranian Women and Girls Empowerment Center in Tehran, reported 15-year-old girls who have come to the center under her management in recent months.

According to Mandani, unfavorable living conditions have caused these girls to suffer social harm and homelessness (The state-run ROKNA News Agency – June 6, 2021).

In the report mentioned above, Mandani also reported homeless women over the age of 60 in Tehran (The state-run ROKNA news agency – June 6, 2021).

Being homeless makes Iranian women and girls the first target for all kinds of danger. Addiction and other social ills become inevitable for them, but the dangers to their lives are also lurking.

In January 2021, a 45-year-old homeless woman in Kerman, who had been forced to take refuge in one of the limekilns due to the lack of a shelter, died in a fire.

She lived in a small block room with a wooden roof in the limekilns of the city’s industrial district. The fire started after the woman lit a tin bucket to generate heat. When the fire brigade arrived, the poor woman had burned to death (The state-run ROKNA news agency – January 19, 2021).

In the same month, a 15-year-old homeless girl was beheaded in Sirjan, a city in the southern Iranian province of Kerman. While emptying a garbage tank, Sirjan Municipality workers noticed an abnormal-looking heavy plastic bag. It contained the teenage girl’s head.

The accused and the victim were both homeless. According to the Sirjan prosecutor, the killer came forward to the police after two hours and revealed the body’s location. In this case, too, government officials arrived at the scene, only to find and punish the accused (The state-run ROKNA news agency – December 28, 2020).

A homeless woman who already spends her nights in a shelter at Tehran’s Shush Park says, “Homeless women like to live in houses just like everyone else – not in a shelter, nor forced camps!”

Suffering from poverty-driven addiction, she describes life as follows: “We use drugs to die, when we have no hope” (The state-run Hamshahrionline.ir – June 14, 2021).

The Iranian regime has fenced off the area around Shush Park in Tehran under the pretext of clearing the city. The fencing around the park has reduced the number of homeless and addicts in the park.

According to Sepideh Alizadeh, Director of the Noor Institute, women do not come to her shelter because they are afraid of being taken to a concentration camp (The state-run Maidan website – June 7, 2021).

Simultaneously with the closure of the park, the regime has launched a crackdown on drug addicts. However, according to Alizadeh, “Gathering and transferring addicts to camps and addiction treatment centers will not work, because psychological services are not provided and the social problems of the individual, including unemployment and homelessness, are not solved in any way” (radiozamaneh – June 9, 2021).

According to Mohammad Aligou, Deputy Minister of Social Affairs of the Welfare Organization, the crackdown measures are being taken despite only 34 safe houses across Iran’s 31 provinces to treat 40 million women (The state-run shahrvand daily – June 20, 2020).

The mullahs’ misogynistic and unpopular regime not only has no solution for the homeless women and girls; with its predatory policies, it is actually increasing their number every day. Videos of the demolition of people’s homes across the country and the displacement of women and children are broadcast on social media every week. One of the last examples was in July.

Municipal officials in Tabriz raided people’s homes and used loaders to destroy them on Wednesday, July 7, 2021. Agents responded to residents’ protests by beating and hurling obscenities at them.

No change can be expected from the clerical regime

Clearly, the inhuman and misogynist regime has neither the desire nor the ability to solve the Iranian people’s problems. The way the regime represses women – the main target – is ironic.

Last month, we witnessed a new wave of uprisings by the Iranian people, who said, with one voice, that they do not want this regime.

In the wake of Raisi’s appointment as President, Le Monde newspaper wrote that the Iranian people have “turned fear into anger.”