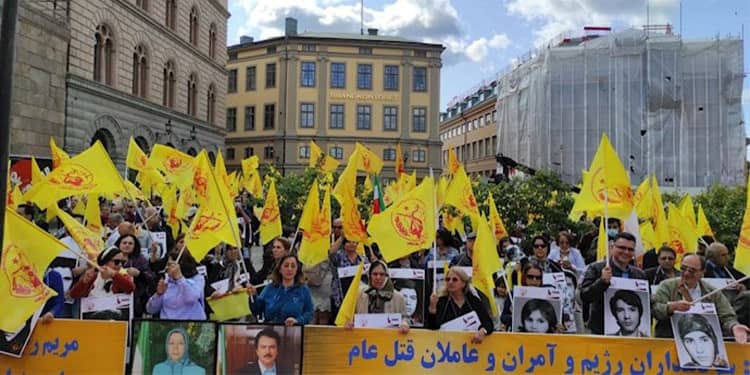 Iranians rally and march in Stockholm seeking justice for the 1988 massacre victims.

Thousands of Iranians, including the families who lost their loved ones in the massacre of political prisoners in the summer of 1988 and supporters of the Iranian Resistance, held a rally and march in Stockholm, capital of Sweden, on Monday, August 23, 2021, to mark the 33rd anniversary of the massacre.

They called for a firm policy towards the Iranian regime to hold its leaders accountable for the 1988 massacre of 30,000 political prisoners in Iran.

Representatives of hundreds of the victims’ families addressed the gathering, and human rights advocates and distinguished personalities supported the Iranian people’s Call-for-Justice Movement.

Mrs. Maryam Rajavi, the President-elect of the National Council of Resistance of Iran, also addressed the gathering in a video message. She urged Europe and the international community to “take steps to fulfill the Iranian people’s desire for international prosecution of Ali Khamenei and Ebrahim Raisi for genocide and crimes against humanity.”

Citing a letter to the EU Foreign Policy Chief by some members of the European Parliament, Mrs. Rajavi pointed out that appeasing and placating the Iranian regime “contradicts European commitments to uphold and stand up for human rights.”

“We urge the international community to recognize the massacre of 30,000 political prisoners in 1988 as genocide and a crime against humanity,” she added.

In her remarks to the gathering, Ms. Ingrid Betancourt, a former Colombian presidential hopeful, explained: “how the absence of the international community’s action has emboldened the regime to put forward a face of genocide as the country’s president.”

Behnaz Attarzadeh, who lost three of her brothers under the clerical regime, Khadijeh Borhani, who lost six brothers and a sister-in-law, and Mother Hajar with seven martyrs in her family, spoke on behalf of the family of the victims. They renewed their vows not to relent their demands for justice until the leaders of the clerical regime face justice in an international tribunal.