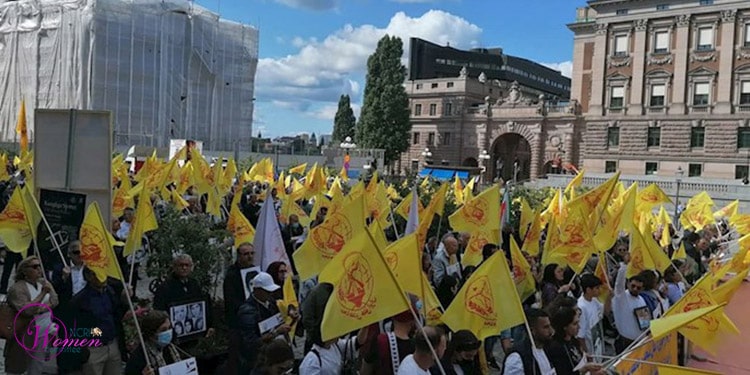 Thousands of Iranians, including the families of the martyrs of the 1988 massacre and supporters of the People’s Mojahedin of Iran (PMOI/MEK), staged a demonstration in the Swedish capital, Stockholm, on Monday, August 23, 2021, to mark the 33rd anniversary of the massacre of political prisoners in Iran. The demonstration took place in front of the Swedish Parliament to protest the execution and massacre in Iran and the need for international prosecution of the leaders of the Iranian regime for genocide and crimes against humanity.

The demonstration took place during the trial of Hamid Noury, one of the perpetrators of the 1988 massacre, in a Stockholm court and symbolized the Iranian people’s Call-for-Justice movement.

Representatives of the families of the martyrs of the 1988 massacre and political personalities supporting the Iranian people’s Call-for-Justice Movement spoke to the participants in the demonstration marking the 33rd anniversary of the massacre of 30,000 political prisoners in 1988.

Khadijeh Borhani is the only survivor of a family of 10 who were all executed by the clerical regime in Iran. Khadijeh Borhani from Ashraf 3 said in a video message to the demonstrators: “My four brothers were killed by the clerical regime. My brother’s wife was also killed. My father, who was a cleric, was isolated and restricted until he passed away due to the suffering caused by the deaths of his sons and the mullahs’ pressure on him. My other two brothers were executed during the 1988 massacre. My sister-in-law Minoo was also executed. My mother had a heart attack and died due to the grief caused by the deaths of her children. There were many like my family in Qazvin, the Jabbarian family, the Hashemian family …”

At the end of her speech, Ms. Borhani called for the perpetrators of the massacre of 1988 to be held accountable before an international court.

Mother Hajar from Kermanshah said about her children who laid down their lives for freedom: “All martyrs are like my children, like Zahed and Rashed. Zahed was tortured in Sanandaj. He was in solitary confinement for a long time. He was tortured so badly that he walked on all fours. His body was so tortured and bruised that one could not recognize him. “My sons were my comrades, and I, like them, have chosen their cause.”

Ms. Behnaz Attarzadeh, another representative of the families of the martyrs, said in parts of her speech: “I was a political prisoner in the 1980s. My three brothers gave their lives on the path to freedom. Mother Ebrahimpour, the Shojaii family, the Adabavaz family, and many other PMOI/MEK families seek justice. We did not let despair overwhelm us, but for many years from the summer of 1988 to November 2019, and afterward, we have become more determined to establish a free and democratic society. We will not forgive, and we will not forget.

“We do not forget that these criminals, including Ebrahim Raisi, hold top government positions. We call on the Swedish Judiciary to issue an arrest warrant for the Raisi, [the regime’s president]. We seek to make arrangements to refer the dossier of the 1988 massacre to the UN Security Council.”

Former Colombian presidential candidate Ingrid Betancourt, a staunch supporter of the Call-for-Justice Movement, told the rally: “Today, we remember that the Iranian regime massacred 30,000 political prisoners in Iran. They were like many of the witnesses who are here today. With their testimonies, they remind us of the crimes that took place after a well-known fatwa that condemned them to death because they were not willing to cave into the demands of the regime. Then, they were buried in mass graves… Ebrahim Raisi was a member of the Death Commissions, and now he is the regime’s president. His appointment shows that the international community did not have a suitable reaction [to the 1988 massacre].”

Swedish MP Alexsandra Anstrell told the participants in this rally: “The Iranian regime’s record of human rights violations is horrific. The Swedish government is trying to bring human rights abusers to justice. We support your struggle. We do not allow the crime to be concealed or covered up. We do not forget that criminals like [Ebrahim] Raisi are in positions of authority in this regime.  We call on the Swedish Judiciary to prepare a warrant for Raisi’s arrest.”

Mrs. Gisoo Shakeri, one of the artists working with the Iranian Resistance, also addressed the gathering. In part of her remarks, she said: “We have gathered here to once again emphasize that Khamenei, Raisi, and other mass murderers involved in the massacre of political prisoners in the summer of 1988 are criminals. They must face justice. The families of the victims are anticipating such a day. We are here to say that we will not forgive and we will not forget. Not only the relatives of the victims and the survivors of that national catastrophe, but all of us witnessed all those crimes. We are witnesses of a genocide, the death of a generation that was the symbol of our nation’s desires and could fulfill their dreams.”

In part of her remarks in the gathering, Ghazaleh Ranji, a member of the Swedish Youth Association, told the participants: “Today, one of the perpetrators [of the 1988 massacre], Hamid Noury, is on trial here. But the snake’s head is in Iran under the mullahs’ rule where, due to the international community’s inaction, Ebrahim Ra’isi became president. In addition, a line of assassins has taken control of the people’s lives and property, those who in that feverish summer of 1988 hanged those brave young souls. Those who in the cold days of November 2019 and under the shadow of [the international community’s] 30-year silence, opened fire on a courageous generation that dared to stand up to the regime. Khomeini and his regime thought that by massacring political prisoners, they would obliterate the resistance forever. But the student protests in 1999, in December 2017, in November 2019, and the uprising of the thirsty people of Khuzestan [in July 2021] manifest the regime’s all-out defeat and the victory of the Resistance movement, resistance at any cost and adhering to one’s cause and ideal.”

The Call-for-Justice Movement demands that an international tribunal holds mass murderers such as Ebrahim Raisi, the clerical regime’s president, and Ali Khamenei, the mullahs’ supreme leader, accountable for the crimes against humanity. The Call-for-Justice Movement echoes the desire of the oppressed people of Iran and the families of the victims.

The international community must heed and listen to the Iranian people’s Call-for-Justice movement. Western governments must end negotiations with the misogynist regime of executions and suppression in Iran.