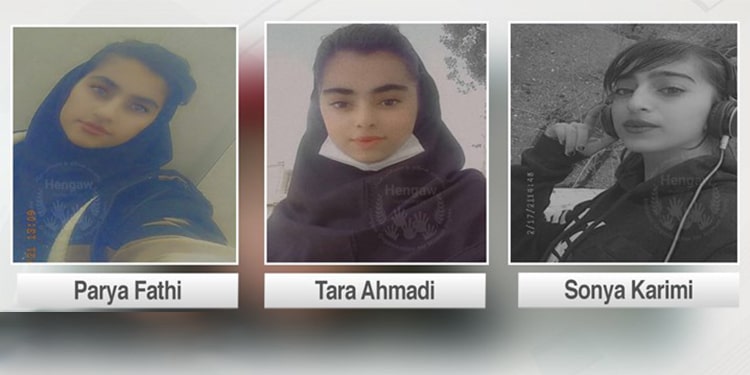 According to Kurdish sources, the IRGC Intelligence forces arrested three teenage girls in Javanrud on August 24, 2021. Javanrud is a city in Kermanshah Province, western Iran.

The three teenage girls were Tara Ahmadi, 16; Sonia Karimi, 14; and Paria Fat’hi, 14. It is unclear why they were illegally arrested.

The girls remained in detention for one day.

Tara Ahmadi hanged herself upon arriving home. She is presently hospitalized in critical conditions in the ICU ward of a hospital in Javanrud.

More recent reports from Javanrud indicate that the IRGC Intelligence summoned and interrogated Sonia Karimi and Paria Fat’hi on August 29, 2021.

The 14-year-old girls were in detention from 8 a.m. until 1 p.m. under interrogation.

An informed source said some of the relatives of the two young women had also been summoned and interrogated.

A source wishing to remain anonymous said, “The Intelligence Department has warned Sonia and Paria that if they give interviews to the media, they would be harshly dealt with.”

According to the source, the reason for the first time arrest of the two young women was their sympathy with one of the Kurdish opposition groups.

The Revolutionary Guard Corps (IRGC) has put pressure on the family of Tara Ahmadi to announce that the IRGC had no role in the arrest of the three teenage girls and their daughter’s suicide. They have been ordered to say that the Sherif’s office had found the three girls after they were reported missing.

It is not clear what happened to the girls while in detention of the IRGC Intelligence. There have been instances in the past when young women committed suicide after being released from IRGC detention.

Mahdis Mir-Ghavami, 26 and an engineer, ended her own life after being sexually assaulted in the detention center of Kermanshah’s Intelligence Department. She took rice pills immediately after she was released. She was summoned to the Intelligence Department on January 24, 2017, and was detained for two days.