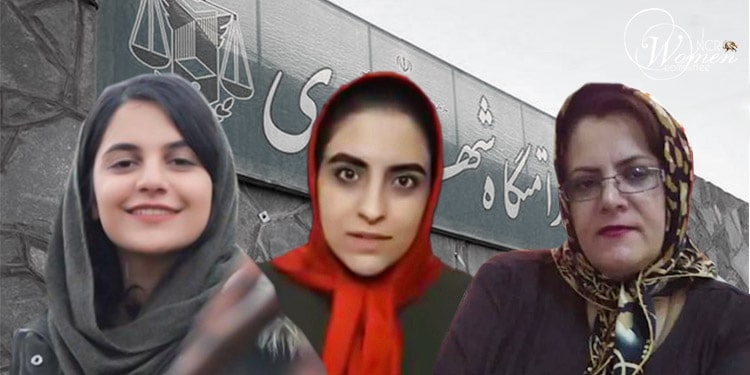 Three political prisoners in Qarchak Prison were interrogated again regarding their statement against the regime’s sham election, fresh reports from this prison say.

The three political prisoners are affiliated with the Iranian opposition, the People’s Mojahedin Organization of Iran (PMOI/MEK).

Forough Taghipour, Parastoo Mo’ini, and Marzieh Farsi were summoned to the 7th Branch of the Prosecutor’s Office of Shahr-e Rey on Wednesday, September 1, 2021.

The branch’s interrogator, Majid Salehi, questioned them over the statement in June. They had called for the boycott of the regime’s sham presidential election in the statement. Another interrogator in the office questioned Marzieh Farsi separately. Their interrogations lasted several hours.

The interrogators had questioned these prisoners another time regarding the same issue on July 26, 2021. Parastoo Mo’ini, 20, was threatened by her interrogator: “The situation might end up like 1988 again!”

“If we do not execute you, we will make you wish to be executed,” he warned.

Parastoo’s mother, Zahra Safaei, who was with them during the previous interrogation, has been hospitalized since August 31. She had suffered a heart attack on August 24 and was taken to hospital with a long delay. No news is available on her conditions and whereabouts.

Soghra Khodadadi, the warden of Qarchak, has isolated these four PMOI political prisoners within the prison. Other detainees are not allowed to enter their rooms. They are also not allowed to go to the library, workshop, the prayer hall, and other parts of the prison. Thus, the Qarchak Prison authorities have created another prison inside the main prison for these women.

The lives of these four political prisoners are in danger in Qarchak Prison. The prison authorities had previously hired mercenaries to kill them by attacking them and pouring boiling water over them. In another vicious attack on December 13, 2020, some 20 prison guards attacked the ward of these political prisoners and brutalized all of them.

Security forces arrested Zahra Safaei in Tehran on February 24, 2020. They also arrested Parastoo Mo’ini, her daughter, and Forough Taghipour and her mother, Nasim Jabbari. They were subsequently transferred to the Intelligence Ministry’s detention center (Ward 209 of Evin Prison). Parastoo Mo’ini and Forough Taghipour were transferred to Qarchak Prison in early March 2020.