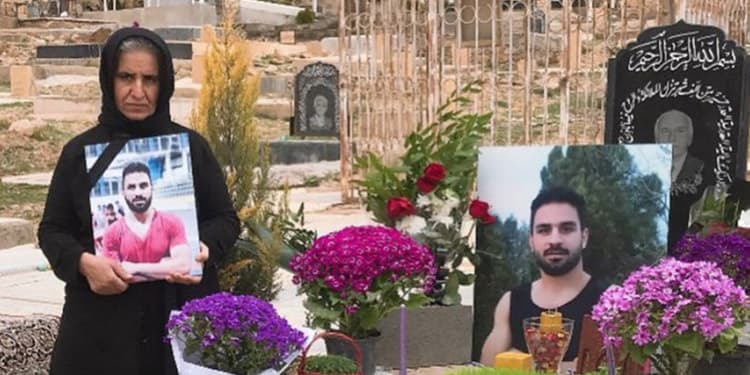 Mother of Navid Afkari by his grave in Nowruz

Elham and Saeed Afkari brutalized, arrested on the anniversary of their brother’s execution

Mother of Navid Afkari appeals to the world over the fate of her sons.

This morning, Sunday, September 12, 2021, the clerical regime’s security forces stopped the family of Navid Afkari at the entrance to the city of Shiraz. They were going to Navid’s grave to prepare for the first anniversary of his martyrdom. Security forces brutally beat Elham Afkari, Navid’s sister, and arrested and brutalized her brother, Saeed Afkari.

Security forces also deleted Saeed Afkari’s Twitter account. A few days ago, he had tweeted, “As we approach the anniversary of my brother Navid Afkari’s death, the security services are pressuring and threatening our family and acquaintances, in a bid to prevent us from holding a ceremony. We have been standing tall under the most brutal repressions for three years. Although we are bereaved, we will continue to resist.”

Despite international calls, Navid Afkari was hastily hanged on September 12, 2020, by the criminal judiciary of the mullahs, headed by Ebrahim Raisi, for participating in the August 2018 protests in Shiraz. Navid’s memorial ceremony is scheduled to be held on Monday, September 13, at his grave in Sangar village.

People of the world! Today, I am appealing to you. Last year, my young and courageous son was innocently hanged by the Islamic Republic without any form of support.

One year past that day, my [other sons] Vahid and Habib have been confined in solitary. They [the authorities] have told Vahid to speak against his brother as a condition for his release.

You, the world community who one day signed a treaty and wrote the Universal Declaration of Human Rights!

Did you hear the sound of my bleeding, broken heart? Do you know that [the clerical regime] hunted my beloved son without him committing any crime? They detained him in their dungeons for months and tortured him in the most inhuman and cruel manners. They wanted to force him to confess to the murder of someone he had not ever seen or known. Even the forensics’ office confirmed the damages he had suffered due to torture.

Do you know that this regime targets a young man and thirsts for his blood? Then, they steal the life, love, and hope of a nation by kidnapping him so that the wheels of their rule continue to turn in blood?

As my helpless, lonely son said, ‘they are looking for another neck for their noose.’ Is there anything left from the conscience of humanity to help soothe the burning of my heart? Does humanity still have a meaning?

Can the world stop for a moment and think that today, too, it is possible that all the life and sweet moments of a family can be pillaged. They can steal a family life and spirit and return a lifeless body to them to prove that the affairs continue to be run by committing crimes under this regime.

Is it not time to end this silence and oblivion and hear the last words of my son, Navid. He said, “People! if I am executed, you should know that in the 21st century with all its human rights mechanisms, the UN, the UN Security Council, etc., an innocent human being was executed despite his efforts and fight [to prevent it].”

Call to the UN and human rights bodies

While condemning the repressive and inhuman actions of the mullahs’ regime against the relatives of the national hero Navid Afkari, Mrs. Maryam Rajavi, the President-elect of the National Council of Resistance of Iran (NCRI), called on the people, especially the defiant youth in Shiraz, Kazerun and other cities across Iran to commemorate Navid’s martyrdom anniversary.

Mrs. Rajavi also urged the United Nations Secretary-General, the UN High Commissioner for Human Rights, the UN Human Rights Council, and the UN Special Rapporteurs to condemn the clerical regime’s repressive actions against relatives of Navid Afkari and other political prisoners and martyrs’ families. It is necessary to send a UN delegation to visit Iran’s prisons and meet with prisoners and their families urgently.

Young teachers and pensioners hold protests in Tehran and other cities