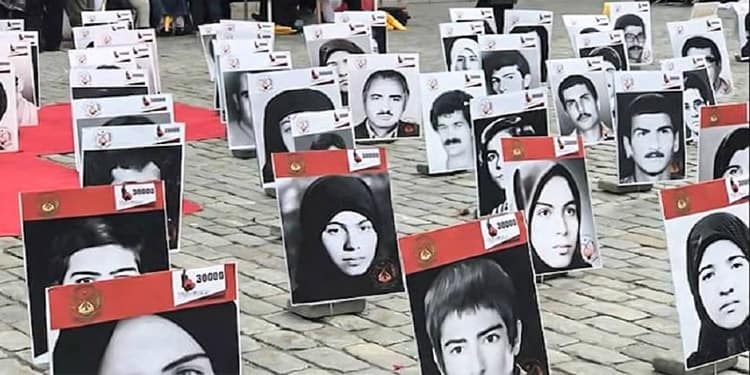 Speeches by Batool Majani, Soheila Dashti, Laya Gohari, and Fatemeh KhazAli to the rally in Stockholm

Seeking justice for the 1988 massacre, witnesses and families of the victims have been speaking out and convey their experiences.

The trial of Hamid Noury, one of the perpetrators of the 1988 massacre, is currently taking place in Stockholm, Sweden. The victims’ families who seek justice have held rallies and demonstrations near the courthouse and other countries. During these rallies, the witnesses of the 1988 massacre and relatives of the victims speak about their experiences.

Batool Majani, a political prisoner for seven years, sought justice for the 1988 massacre in a rally in Stockholm on August 10. “The clerical regime has executed seven members of my family,” she said in her speech at the rally. “Five of them, including my brother, Abdul Rasul Majani, are among the victims of the 1988 massacre. I send my greetings to the 30,000 political prisoners sent to the gallows on behalf of the victims’ families. More than 90% were members and supporters of the People’s Mojahedin of Iran (PMOI/MEK). All the massacred women were affiliated with the PMOI. These heroines paved the way for the liberation of Iranian women. They were the vanguards of the resistance movement and the equality movement in our occupied homeland.”

In an interview with the Swedish National Television on August 13, Batool Majani also said: “My uncle was killed 40 years ago after two days of being tortured. My father was arrested and murdered one month later without standing any trial.”

Soheila Dashti is also among those who seek justice for the 1988 massacre. She spoke to the rally in Stockholm on August 10, where she said: “Today, for the first time, the international community is hearing about the horrendous crimes [taken place in Iran]. Who were the victims who laid down their lives for freedom? I had the chance to be in court this morning. When I heard the names of 110 PMOI prisoners executed in Gohardasht Prison, one by one, I said to myself: The names of these unknown stars are now being heard in an international forum. Thanks to the Resistance movement, now the voice of the Call for Justice Movement is being heard around the world.”

The Swedish National Television also interviewed Ms. Dashti on August 13, when she said: “My 26-year-old cousin was executed. Of course, the crime is not just about my family but about all Iranians. They massacred a generation. We are talking about the mass execution of more than 30,000 people. Most of those executed were between 20 and 26 years old.”

Laya Gohari is a former political prisoner who lost her brother and many friends under the clerical regime. She seeks justice for the victims. In part of her speech to the Stockholm rally on August 10, Ms. Gohari said: “They arrested me in November 1981 for supporting the PMOI. I was a student then and only 17 years old. I spent my captivity in Evin and Ghezel Hesar prisons. I experienced a gradual death for six months in solitary confinement of “grave” and “doomsday.” All the pressures and tortures were not enough. I was shocked to hear of the execution of my brother, Mohammad Sadegh. He was executed on February 10, 1982, when he was only 19 years old. In March 1986, after my release from prison, I learned that my cousin, Saeed Assadollah Khani, my aunt’s only child, had also been executed at 18.

“In the summer of 1988, there was not a day when I did not hear of the death of a loved one. Every day, I heard of my former cellmates hanged for remaining loyal to their beliefs. The Voice of Mojahed Radio announced the names of the victims from the onset. Heroines like Mojgan Kamali, Shahin Jolghazi, Shourangiz Karimi, Farahnaz Zarfchi, Mojgan Sorbi, Tahmineh Sotoudeh, Roghieh Akbari Monfared, Hanifeh Emami, Maryam Pakbaz, and others. Indeed, what was their crime? What was the crime of 30,000 political prisoners, most of whom were young and the most precious assets of our country? What was their crime but freedom-loving?

“Without doubt, we seek the prosecution and punishment of the regime in its entirety, particularly the mullahs’ supreme leader Ali Khamenei and their murderous president, Ebrahim Raisi. No doubt we will take them to court and have them face justice.”

Fatemeh KhazAli spoke to the rally in Stockholm on August 11. She said in her speech: “I am Fatemeh KhazAli, the sister of Mohsen KhazAli, one of the victims of the 1988 massacre. My brother Mohsen was arrested at 21 after a peaceful demonstration of half a million people in Tehran on June 20, 1981. After mental and physical torture, he was sentenced to 15 years in prison only for participating in that demonstration. Mohsen was serving his prison term in Evin Prison. But again, and without any apparent reason, they tried Mohsen again in August 1988. The court convened on the order of the “Death Commission,” which included Ebrahim Raisi, the mass murderer who is now the regime’s president. The trial lasted only a minute. Like all other prisoners, he had to answer a question: ‘Are you a Mojahed or a hypocrite?’ ‌Mohsen bravely emphasized that he was a Mojahed. Like 30,000 PMOI prisoners and other resistant prisoners, he chose to die on the path of freedom. He was executed on July 28, 1988, along with other PMOI prisoners.

“Despite their efforts, the mullahs were not able to conceal this crime against humanity. Now, the world knows about it. We, the families of the victims of the 1988 massacre, have vowed not to forget and not to forgive this crime. We will not relent until the perpetrators of this heinous crime face justice.”