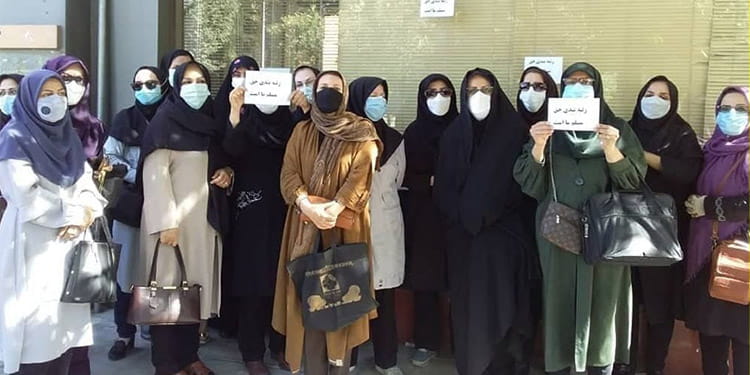 Half of the teachers were women who actively and widely participated in the protests. The protesting teachers held their protests outside the Department of Education in every city.

In Qom, teachers held their protest despite being threatened the night before by the regime’s agents. They chanted: “Teachers are awake, they detest discrimination,” “it is our inalienable right to receive salaries according to our ranking,” and “livelihood and dignity are our inalienable rights.”

Earlier on Saturday, September 18, Iranian teachers held protests in 14 provinces. The majority of protesters in the 14 provinces were women. Their demand was implementing the ranking plan according to which teachers would receive 80 percent of the salary of the science faculties of universities with the same work experience.

The 20th day of protest by teachers with Green Report Cards

Teachers with Green Report Cards continued their protests for the 20th successive day on September 23, 2021. The young teachers who have passed the Education Ministry’s 2020 employment exam are holding a prolonged sit-in protest outside the ministry’s building in Tehran. They demand formal employment by the Education Ministry. Teachers have joined the protest in Tehran from various cities, stayed at the sit-in place all night long, and continued their protest rallies.