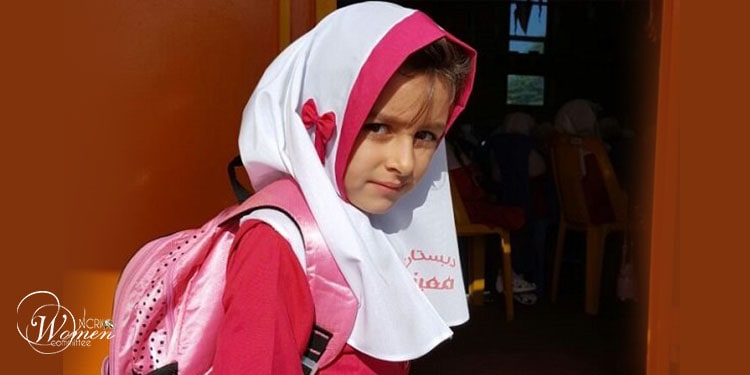 In the past two years, the clerical regime’s deliberate inaction in tackling the Coronavirus has filled the homes of Iranians with the scent of death as more than 430,000 people have lost their lives due to the virus. Iran has the highest per capita death in the world.

The clerical regime does not have any plan for the vaccination of schoolchildren. They have not yet finished the vaccination of teachers, education staff, and drivers of school buses. Nevertheless, the Education Ministry is reopening the schools in Iran and working on expanding in-person education. The ministry justifies its decision by saying it is following the world model.

The state media have reported that the henchman of the 1988 massacre, Ebrahim Raisi, who is now the regime’s president, will ring the bell on September 25 to start the new school year.

Therefore, the autumn begins with the mullahs’ regime setting the stage so that Iranian families will have no choice but to send their children to school despite the arrival of the sixth wave and the Lambda variant.

Vaccination of students not in prospect

While attending schools, universities and rallies can only be allowed for those vaccinated twice, the vaccination of 14 million Iranian students does not have any prospects.

At the same time, the National Coronavirus Combat Taskforce will provide vaccines only for the students who have underlying medical problems, and even that depends on whether they receive a sufficient amount of vaccines. Furthermore, it is not clear how many teachers will succeed in getting vaccinated when the schools reopen. (The official IRNA news agency – August 29, 2021)

Earlier, Mohammad Reza Mahboubfar, a social harms expert, said, “The age of contracting the virus has dropped. Now, children, teenagers, and youths have to deal with this catastrophe. In just one month, four thousand children and babies suspected of contracting the virus have been hospitalized in Kermanshah. On the other hand, 52 children died because of the Coronavirus in the past 1.5 years alone. There have been 1,800 cases of children in Isfahan Province since March.”

Noting the “slow pace of vaccination,” Maboubfar described Iran as “the heaven of mutated Covid viruses in the Middle East and the world.”  (The state-run Hamdeli newspaper – August 29, 2021)

In light of the catastrophic contagion in Iran and the high death toll, an epidemiologist, Hamid Souri, said this about the reopening of schools in Iran: “We are still busy dealing with the fifth wave. No country would open schools or allow gatherings in such circumstances. These actions are fueling the epidemic in a very acute situation. The steps that need to be taken to reopen the schools have not yet been taken.” (The state-run radareghtesad.ir – August 31, 2021)

Many Iranian students use public buses to go to school. The cities are crowded, and the regime has not taken any measures to reduce traffic. In contrast, it should have increased the number of metro trains and city buses.

Many schools face infrastructural problems, such as inadequate classroom space, standard sanitation and toilets, and adequate ventilation. Most schools are overcrowded. (The state-run ISNA news agency – August 21, 2021) The Education Ministry officials have not offered any specific plan to resolve these problems.

Let us not forget that last year, too, the regime did not make any preparations before moving education to the virtual space. As a result, three million students were excluded from the education cycle. They were mostly children and teenagers who did not have smartphones or tablets or lived in places without access to the internet. (The state-run Eghtesadnews.com, June 15, 2021) Girls drop out more than boys.

The students’ lack of access to smartphones caused suicides, family disputes, and many other problems. During the Coronavirus pandemic, the clerical regime’s mismanagement created these problems and imposed them on lower-income Iranian families.

Enrolling students to rob the public

In reopening the schools in Iran, the clerical regime also seeks to rob the people’s pockets. The intention is so clear that even a TV commentator started complaining about this, “The question is that last year, too, around this time you said that the schools would be opened. People went and enrolled their children and paid the tuition and the fees for transportation, uniforms, etc. After two weeks of holding classes, there were no more classes and no reimbursements. Now that you are saying these things have you thought about people’s pockets? All the schools will receive large sums of money from people. They make people pay for a full term of classes and promise to hold the classes for sure, but….” (The state TV network 5 – August 29, 2021)

Eighty percent of Iranians live below the 14-million-Toman poverty line. Even a large portion of the middle class has been pushed under the poverty line. They cannot afford to send their children to school, as the costs of only the first month are several times the monthly salaries of the majority of the populace.

Less than two weeks before the reopening of schools in Iran, the costs of preparing children for school are as the following:

The total cost adds up to 7,730,000 Tomans only for a student’s entrance to the school. For children who go to public schools, this cost is at least 3 million Tomans.

In light of the 50% inflation rate and the soaring prices of basic staples, the economic situation of the Iranian people in 2021 is worse than it was in previous years.

The minimum wage for 14 million Iranian workers is 2.6 million Tomans ($101). The minimum was for millions of government employees and teachers is around 4 million Tomans ($144). Nurses are paid as much as the workers, and young medical interns receive less. Comparing those expenses with these salaries illustrates the situation of millions of children of wage-earning families who have no prospect of reopening schools in Iran. (The state-run www.598.ir – September 15, 2021)

The Coronavirus takes the lives of at least 2,000 people in Iran every day. Many of the families are worried about their children and are not willing to send them to school.

Following are some examples of families and students reacting to the news of the reopening of schools in Iran:

“As a parent, I will not send my child to school. Her life is more important than learning 1,000 lessons.”

“There is no way that we send our children to school during the pandemic. They cannot maintain social distancing in the schoolyard or at the drinking fountain.”

A student said, “Why do they treat us like an object? I study in 11th grade and am in a difficult position for my education. It is baseless when they say students need not be vaccinated if their surrounding people are vaccinated. The Delta variant does have any limits in taking people’s lives. I am willing to sacrifice my studies and education but save my life.”

Another student said, “It is not a wise decision to go to school.”

Another one said, “I think it would be better to remain illiterate than to attend school in person, and then something happens to someone.”