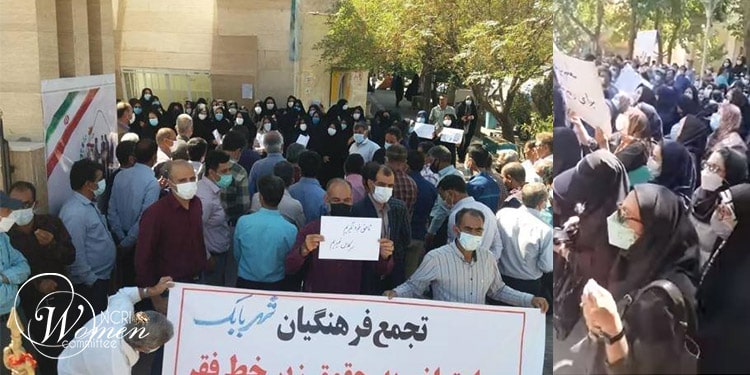 Simultaneous with the beginning of the school year, on September 25, 2021, Iran teachers held protests in more than 40 cities across the country and in 20 provinces. Women are active and vocal in these protests.

The teachers protested their unbearable job and living conditions and the Education Ministry’s failure to implement the ranking plan, pay the pensioners’ benefits, etc.

They said so long as they do not obtain their rights, they will not attend classes to teach. They also decried discrimination against teachers.

On September 18 and 23, Iran teachers held protests in various cities. More than half of Iranian teachers are women.

Teachers with Green Report Cards who passed the Education Ministry’s employment exam last year have also held protests and sit-ins in front of the Education Ministry in Tehran for more than 20 days. Teachers have joined the protest in Tehran from various cities, stayed at the sit-in place all night long, and continued their protest rallies. Many of these teachers have brought their young children with them.