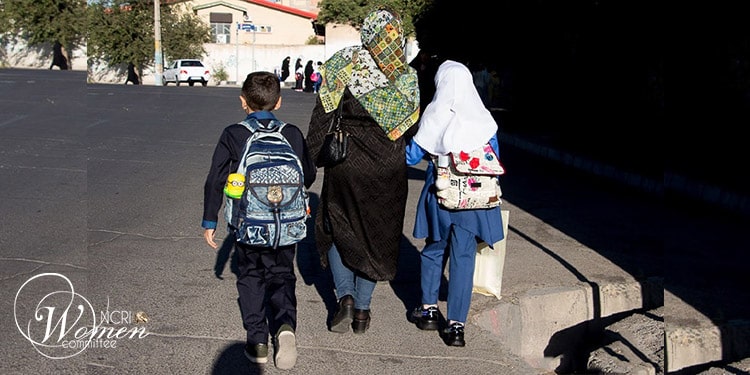 The many restrictions Iranian mothers face and the many rights they do not enjoy.

According to a news article published by a semi-official newspaper in Tehran, the clerical regime’s Education Ministry will no longer hand over the children’s report cards to their mothers.

The article by Sharq on September 13, 2021, cited a text message from the ministry to some parents. The text message indicated, “despite all due respects to mothers, the report card of your child will only be handed over to the father or the paternal grandfather.”

Although the Education Ministry later denied the news, the incident again shed light on the many restrictions Iranian mothers face and the rights they do not enjoy.

I must fight all my life for custody rights

“Don’t think that our problems end here. They create a new problem for us every day,” said Narges, a single mother, and head of household.

Narges, who has lost her husband, faces custody issues every day.

“As a single head of my family, I have to overcome thousands of moral and material issues in this country every day. I must fight all my life to create a secure environment for my daughter, who has lost her father. Why do I have to endure these hardships? I have a daughter and a son who go to school. No institution supports us. Instead of supporting us, they create more obstacles. Why should my daughter’s grandfather take precedence over me, who was with this child from the first moment of her life? What is his priority over me? Only because he is a man?” Narges asked.

She went on to add, “A few months ago, I went to buy stocks for my daughter. They told me that I needed to have an ‘Observation Card.’ So, I had to talk to my daughter’s [paternal] grandfather, who is sick. We went to the notary office, and he gave me a power of attorney.”

Narges said, “Other women have more problems as their husbands are tough with these laws. I have seen many women who forsook their right to divorce or dowry in the interests of their children.”

The bitter truth of being a mother in Iran

“I oversee my children’s studies and education,” says Afsoun. “My husband is not involved at all as we agreed from the outset. Even the school checks are paid from my salary. Now, imagine! They have ordered the school not to hand over my children’s diploma to me. You might not believe it, but they give a copy to the child but not to their mother.”

Afsoun goes on to add, “This is the bitter truth of being a mother in Iran. Your signature is not even credible for the parental consent forms for camping. Only the father can sign unless you’ve filled out custody forms included in your child’s student file. Otherwise, you have no rights as a mother.”

According to Afsoun, a mother cannot buy a SIM card for her child under her name. Iranian mothers cannot purchase insurance for their children. Most banks would not allow a mother to open an account for her child.

Nassim is a nurse. Her 8-year-old daughter suffered from an immune system disorder.

“One day, they called me from school and told me that they were on their way to the hospital because my daughter had a seizure. At the hospital, doctors said she had to undergo surgery. They reminded me that we needed my husband’s signature for the operation, but he was abroad on an assignment. I knew well that they would not accept my signature. Those were terrible moments. My daughter’s life was in danger, but she had to wait because her mother was not qualified to sign the paperwork.”

Nassim ultimately managed to talk to acquaintances in that hospital and get the surgery going until her father-in-law arrived and signed the papers. She recalls, “That day changed the meaning of motherhood for me. Even my daughter’s grandfather even had more rights to my child than I did.”

“After this incident, I went to the Notary Office and received my husband’s power of attorney to sign the papers in such circumstances. However, it was truly humiliating,” Nassim concluded.

The legal loopholes hurt not only women but also children

The manager of a safe house for battered women in Arak says many mothers must go back and forth between the school and the education department to find a solution.

“Many men use these laws as a tool to force their wives to change their decisions about divorce. Some men agree with the divorce but want to give a hard time to their wives. And the legal loopholes give leeway to men for such harassments,” said Sepideh Kamayani. “It is regrettable that in such conditions, children are the ones who are hurt more.”

Mina Jafari, a lawyer and a children’s rights activist, believes that such loopholes affect women and children.

According to Jafari, “One side of the issue concerns the law. The other side, which is the main part, concerns the society that suffers social ailments because of these loopholes. The consequences affect not only women but also children. Children’s interests must be the priority in every legislation. Regrettably, Iranian laws damage women’s rights and the rights of children along with them.”

Mina Jafari concluded, “Throughout the years, despite the insistence of women and children’s rights activists and jurists, we have unfortunately seen no determination on the part of the officials to create change. And the prospect of change is inconceivable for near future.”

According to the clerical regime’s laws, men are the head of the household. On this basis, mothers cannot open a bank account for their children without the presence or official permission of the father. They cannot buy a SIM card or obtain their passports. Such discriminatory laws become extremely dangerous when it comes to the child’s medical treatment and surgical operations.

The Iranian laws need to be overhauled to protect the public’s interests, particularly women’s and children’s interests.