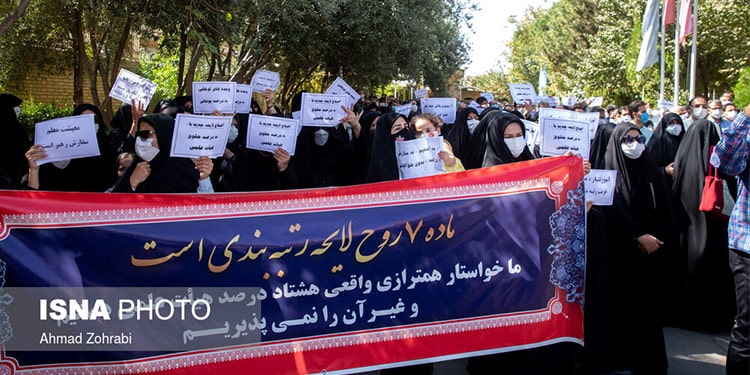 99% of Iranian teachers live under the poverty line

Iranian teachers and educators have again taken to the streets to protest their horrible living conditions and job status. According to a semi-official website, 99% of Iranian teachers live under the poverty line.

Iranian teachers and educators gathered outside the Department of Education in Qom on Thursday, September 30.
Working and retired teachers call for implementing the teachers’ ranking plan according to which they should receive as much as 80% of the salaries of the science faculties in universities. The retired teachers also demand balancing of their pensions (with the soaring inflation and high prices). (The state-run ILNA news agency – September 30, 2021)
On Thursday, another group of teachers in the Central Province also gathered outside the Department of Education in Arak, the province’s capital.
A group of school staff and workers also held a protest gathering outside the Department of Education of Chaharmahal and Bakhtiari province in Shahr-e Kurd, the province’s capital. The protesters had come from Boroujen, the Beldaji region, Kiyar county, and other districts to protest against their bad living and job conditions.
Ninety-nine percent of teachers in Iran live under the poverty line, according to the state-run Salamatnews.com, September 28, 2021.