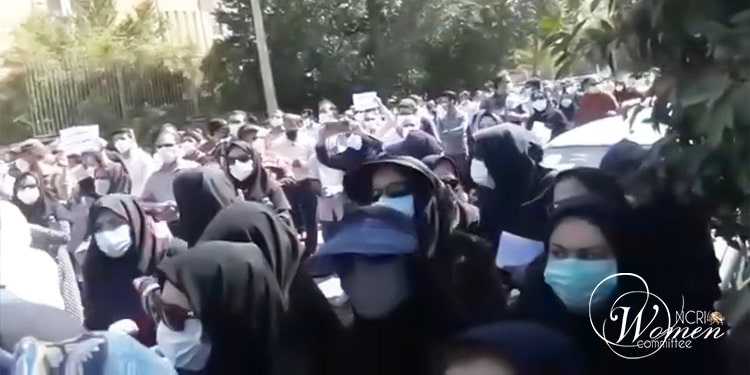 Social security retirees and teachers held protests in Tehran and 16 other cities on Sunday, October 3, 2021. Many protesters were women expressing their protest against discrimination, low salaries, difficult living conditions, and the officials’ ignoring their rightful demands.

In Tehran, teachers gathered across from the parliament. In Isfahan, Shiraz, Ahvaz, Kerman, Bandar Abbas, Zanjan, and Darab, they gathered outside the education departments in their city.

The teachers’ protests got underway despite threats by the intelligence services’ agents.

The teachers cried out and demanded their inalienable rights, refuted the regime’s hollow promises, and called for free education for children.

Women make up more than half of the teachers’ population in Iran. They live on salaries, which are way below the poverty line. They face numerous social and legal discriminations because of their gender. Despite tremendous work pressure, they do not receive a fair salary.

In the meantime, retirees of the Social Security Organization held protest gatherings in Tehran, Mashhad, Tabriz, Arak, Khorramabad, Ahvaz, Isfahan, Qazvin, Boroujerd, Kermanshah, Karaj, and Rasht. The social security retirees vowed to continue their protests until their demands were met. They chanted slogans about their empty food baskets, high inflation, high prices, and discrimination against them.

For years, the mullahs have wasted the Iranian people’s assets and properties on domestic suppression, wars, terrorism, and missile and nuclear programs. They have brought nothing to the people of Iran but oppression, discrimination, poverty, unemployment, and inflation.