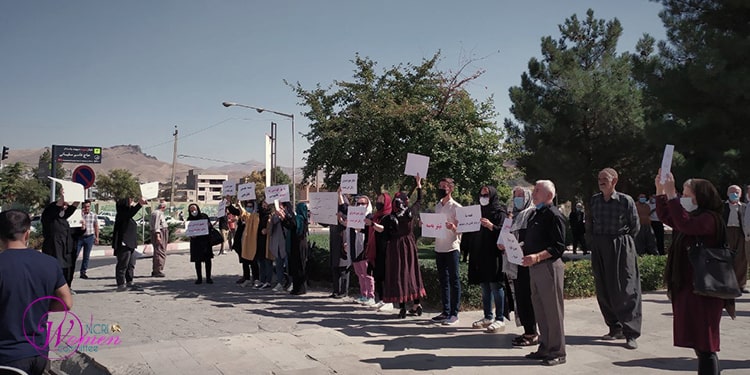 The murder of a young woman, Faezeh Malekinia, outrages the public

The murder of a young woman, Faezeh Malekinia, has outraged the public in Kurdistan and other parts of Iran.

A group of Kurdish women’s rights activists held a protest gathering outside the Department of Justice in Sanandaj, the capital of the Iranian Kurdistan province, on Wednesday, October 6, 2021. Their palacards read: “No place is safe for women;” “All of us are Faezeh;” “Everyone bears responsibility in the murder of women;” “No to the murder of women.”

The murder of a young woman in Sanandaj by her father

Faezeh Maleki was a young divorced woman who intended to get married again with the man of her choice.

Her father, however, did not agree with her marriage. According to the latest reports, he imprisoned her in the toilet in a garden. Subsequently, he doused her with petrol and set her alight, on the night of Saturday, October 2, 2021.

The news of Faezeh’s condition was first posted on the social media by her surgeon, Iman Navvabi. She had told the doctor that her father had set her on fire.

Faezeh’s father said his daughter had self-immolated and his hands had burned while trying to put out the fire.

The Coroner’s Office did not do an autopsy on Faezeh’s body or issue a document, legally mentioning the reason for her death.

Government or judicial agencies have not taken up the case and her father has not been interrogated. Some officials have told the press and state media that the case does not have a private plaintiff, and it appears to be a case of self-immolation.

Faezeh’s family prevented a women’s rights activist from interviewing Faezeh’s younger sister who accompanied her father and sister in the garden on the day of the incident.

The man who was going to marry Faezeh said she had been very hopeful. “I do not believe that Faezeh committed suicide,” he said, adding, “Two days before the incident, there was no news of Faezeh. Her father had detained her in the garden’s toilet. One cannot lock the toilet’s door from inside, and clearly, the door had been locked from outside.”

On October 4, 2021, the public and general prosecutor of Sanandaj, Mohammad Jabbari, announced that the doctor who made the case public would be dealt with.

Mohammad Jabbari is one of the most ruthless and corrupt judges in Kurdistan Province who was directly involved in the suppression, murder, and arrest of the people of Sanandaj and Marivan during the November 2019 uprising.

Not a week goes by in Iran without the honor killings of young women making news headlines.

Violence against women is one of the worst violations of human rights in the world. Yet, in Iran, it has not been criminalized. The laws on the punishment of the murderers are weak, giving them special privileges and giving them the license to kill.

Women’s rights activist Monireh Arabshahi back in prison while ill