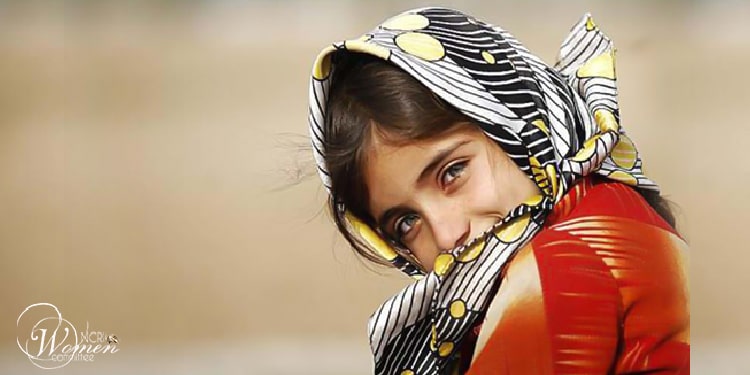 The Iranian girl child is the youngest victim of the Iranian regime’s brutal discrimination against women.

October 11 marks the International Day of the Girl Child by focusing on goals to improve the conditions of girl children worldwide. It is also an opportunity to raise awareness of gender inequality faced by girls worldwide based upon their gender. This inequality includes access to education, nutrition, medical care, protection from discrimination, violence against women, and forced child marriage.

The 2021 theme is “Digital Generation, Our Generation,” to address the needs of girl children during the pandemic. The Iranian girl child, however, is deprived of the most basic facilities for online education. They include computers, tablets, smartphones, as well as easy access to the Internet.

The global occasion can reflect the successful emergence of girls and young women as part of society. But unfortunately, under the rule of a misogynist regime, most news about the Iranian girl child concerns violence, suicide, and forced child marriages—other news concerns deprivations from education, healthy nutrition, and medical care.

On the other hand, rampant poverty pervading the Iranian society has led to increased numbers of child marriages, school dropouts, child laborers, runaway girls, adolescent addicts, and prostitution at 13 and 14.

The clerical regime does not heed the SDGs

The abolition of the UN 2030 Education Document is among one of the first measures Ebrahim Raisi approved after taking office.

Zahra Ayatollahi is a member of the Women’s Socio-Cultural Council of the Supreme Council of the Cultural Revolution. She announced, “From now on, the basis for respecting the rights of children (in Iran) is the National Document on the Rights of Children and Adolescents.” (Interview with the state TV network 2 – September 20, 2021)

The National Document on the Rights of Children and Adolescents explicitly supports the marriage of children under 13 years of age.

The document states that child marriage is not “illegal.”

“If the children are forced into marriage by their parents, the parents will be punished because they do not have the right to marry the child. At the same time, the law says that if a girl under 13 and a boy under 15 wish to get married, and marriage is in their best interest, and the parents recognize this interest, and the court approves it, the marriage can take place and is not illegal.”

Poverty catapults the Iranian girl child from childhood to adulthood

The Coronavirus outbreak harshly affected the lives of the vast majority of Iranian families already living under the poverty line. As a result, many families end up selling their daughters out of extreme poverty.

Poverty is the principal cause of many social ills, particularly illiteracy, child labor, and early forced marriages for the Iranian girl child.

“Some families wed their daughters before the age of 13 without official registration, and only afterward do they go to court to get a marriage license,” said Mahmoud Abbassi, secretary of the National Authority for the Convention on the Rights of the Child. “Due to black poverty, these families wed their daughters in exchange for one million Tomans ($36).” (The state-run jahanesanat.ir economic newspaper – August 30, 2021)

The government loans for marriage starting in 2019 led to a four-fold increase in child marriages in Iran. Acknowledging this, Mohammad Mehdi Tondgouyan, the former deputy Minister of Sports and Youth, added, “It signals the danger of severe poverty in Iran.”

Many social activists have emphasized the need to counter child marriages. But the Iranian regime has never passed a law banning early marriages. The number of child marriages in Iran is “about 30% higher than the global average.”

A social ills expert, Mohammad Reza Mahboubfar, revealed, “Currently, 100 marriages under the age of 15 are registered in Iran in every 24 hours.” (The state-run Arman-e Melli newspaper – July 27, 2021)

2020 saw an increase in child marriages

Iran’s National Statistics Center publishes only the statistics on registered marriages. Many traditional marriages are never recorded. Therefore, one should remember that the Iranian regime’s published statistics are always minimal and never transparent.

A nurse working at a hospital in suburban Tehran said, “Every day we see the delivery of girls between 12 and 17 years old, whose parents are generally poor.” (The state-run jahanesanat.ir newspaper – August 30, 2021)

Ali Kazemi, a legal advisor to the clerical regime’s Judiciary, had previously acknowledged that “an average of 500,000 to 600,000 Iranian girls under the age of 14 get married every year.” (The state-run Entekhab.ir newspaper – March 4, 2019)

Mohammad Baqer Moghaddasi, a lawyer from Bojnourd, said: “In addition to poverty, the prevalence of a culture of violence, marriage, and unjustified prejudices are among the reasons for human trafficking. Because the girl is married by force and without consent, she wants to get rid of the existing conditions in any way.” (The state-run Sobh-e Iran newspaper – July 3, 2021)

Some girls get married at the age of 9, divorce after three years, and return to their father’s home with three children. (The state-run khabaronline.ir – August 29, 2021)

Early and forced marriages are among the reasons for suicide among young women and girls in Iran.

Child marriage means rape. When a man marries a child, he abuses that child. Marriage must be after puberty; otherwise, it can have no meaning other than rape. These are the remarks by Sima Ferdowsipour, a psychologist and university professor in Tehran. She believes the best age of marriage for girls to be 21 years old and above. (The state-run khabarfori website – July 29, 2021)

The following are examples of suicides due to forced marriages.

Anahita Shahidi, 18, hanged herself at home in Sepidar village in Boyer-Ahmad, in February 2021 because she did not want to marry her cousin.

Ala Ebrahimi, 16, committed suicide in March 2021 in one of the villages of Saqqez in Kurdistan province.

In March 2021, a 15-year-old girl in Taybad in Khorasan Razavi province took her own life by taking rice pills. The girl was a victim of child marriage. (The state-run ISNA news agency – March 24, 2021)

On April 15, 2021, in Gonbad Kavous, Behnaz G. set herself on fire and died. Behnaz married when she was 15. She suffered depression because of losing two babies within two years. After the death of her second baby, she killed herself at the age of 17.

Abuse of the Iranian girl child

The largest number of contacts with the social emergency line is about child abuse, said one of the National Welfare Organization’s Social Emergencies officials. (The state-run Khabarfori.ir – June 16, 2021)

Girls are abused more than boys. 52% of abused children are girls, and 57% of the perpetrators are fathers. (The state-run salamatnews.com – October 4, 2018)

The General Director of the Welfare Department of Khorasan Razavi Province announced the registration of 1,866 contacts with this province’s social emergency in six months from March until September 2021 reporting child abuse. (The state Television – September 5, 2021)

Girls drop out of school more than boys

The Iranian girl child is the primary victim of pervasive poverty in Iranian society. They are forced to drop out of school because there is no free education in Iran under the mullahs’ rule.

Girls often drop out of high school because there are no secondary schools in deprived and rural areas, or the schools are located in remote areas. (The Young Journalists Club website – March 3, 2021)

Also, the daughters of low-income families are forced to marry at this time and cannot continue their education. (The state-run ROKNA news agency – July 24, 2021)

Between 3.5 million to 5 million students dropped out of school in the academic year 2020-2021. The catastrophic mass dropout was due to the lack of smart devices to connect to online classes. Due to the government’s negligence and lack of proper education planning, more than a third of Iranian students were left out of school. (The state-run Rassekhoon.net – June 15, 2021)

Mohammad Reza Seifi, director-general of nomadic education at the Ministry of Education, admitted that many nomadic female students in West Azerbaijan province did not enroll in school because they could not afford to buy textbooks. (The state-run ILNA news agency – August 30, 2021)

Girl children make up half of the population of child laborers

The phenomenon of child labor is one of the problems that, like all other crises under the clerical regime, is not only not solved but also spreads every year.

The population of working children in Iran exceeds seven million. At least half of these children are girls. (The state-run Tasnim news agency – September 27, 2019)

In addition to selling nuts, flowers, and chewing gums at the crossroads or cleaning the windows of cars, girls also work in the junkyards sifting through the garbage.

The garbage mafia in Tehran uses homeless children, women, and addicts to collect garbage. A member of the regime’s parliament acknowledged that out of around 15,000 garbage collectors in Tehran, 5,000 are children. Forty percent of these children between 10 and 15 and the sole provider of their families. (The state-run Khane Mellat website – October 18, 2019)

Garbage girls are more vulnerable than boys. They are exposed to more diseases. Their hair is long and full of lice. They do not have enough water to wash, and the water is contaminated. (The state-run Khane Mellat website – October 20, 2019)

Add to these conditions the Covid-19 outbreak throughout Iran. Deprived Iranian girls are forced to work in this situation to survive.