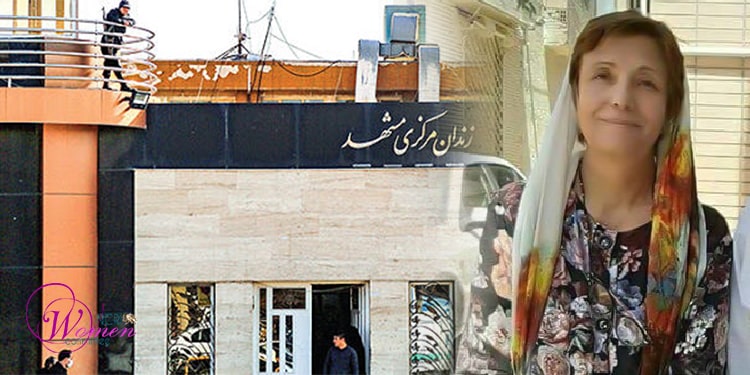 Imprisoned teacher Nosrat Beheshti has started a hunger strike in Vakilabad Prison of Mashhad. Mrs. Beheshti started her hunger strike on October 24, 2021, in protest of her temporary detention and unacceptable charges leveled against her.

The imprisoned teacher Nosrat Beheshti has declared that she has also stopped talking until her demands are met. She said Vakilabad prison authorities are responsible for her life. She demands to be released and exonerated from all charges against her.

Security forces arrested Nosrat Beheshti on August 4, 2021. She has a 13mm kidney stone and is presently under mental stress and duress.

Nosrat Beheshti is one of the 14 signatories of a letter demanding resignation of the clerical regime’s supreme leader, Ali Khamenei.

She is a retired teacher and mother of six. Security forces arrested her for participating in the teachers’ protests and calling for balancing their salaries with other government employees. The authorities have detained her for the past three months in the detention center of the Intelligence Department and Vakilabad Prison of Mashhad, the capital of Razavi Khorasan Province.

Teachers have been holding consecutive nationwide protests in recent months.

In September, female teachers participated in at least 113 acts of protests. The teachers’ protests included at least 20 days of round-the-clock sit-in protests in Tehran by Teachers with Green Report Cards, 21 protests in various cities, and 3 nationwide protests in 70 regions.

These protests are in reaction to the horrendous living conditions and livelihoods of Iranian teachers under the mullahs’ rule in Iran. Several teachers have committed suicides in recent months. Release of imprisoned teachers is among the demands of these protests.