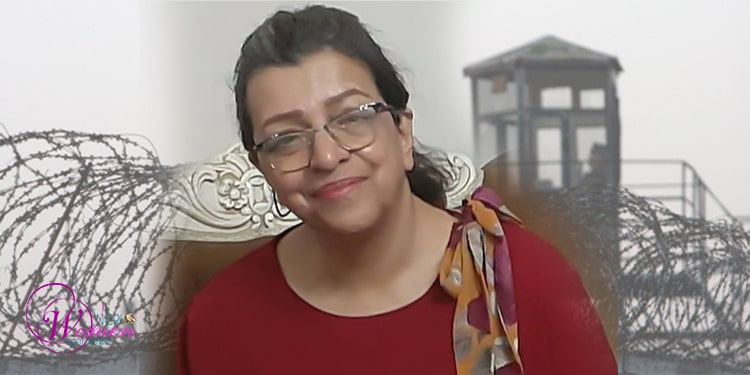 Tehran’s Revolutionary Court issued a ruling according to which Mahboubeh Farahzadi is fined. Her mobile phone will be confiscated and she is banned from participating in gatherings and meetings for two years.

The court convened on Tuesday, October 12, to examine the charges leveled against Mrs. Farahzadi, a teachers’ rights activist and a member of the Voice of Iranian Women Association (Neda-ye Zanan-e Iran).

Mrs. Farahzadi was informed of the ruling on October 18. She must pay 1.5 million Tomans in cash. The court will confiscate her mobile phone and ban her from participating in gatherings and meetings for two years.

Security forces broke into Ms. Farahzadi’s home and arrested her on May 29, 2021. Branch 7 of the Prosecutor’s Interrogations Office of Evin arraigned her charges, set a 50million-Toman bail, and temporarily released her after a few hours.

Evin’s 7th Branch of Interrogations has summoned Ms. Farahzadi twice, once on May 19 and again on September 30. Her charges include “propaganda against the state and public institutions.”

Other members of Voice of Iranian Women arrested

The 2nd Branch of the Prosecutor’s Office of Evin summoned Akram Nasirian and Nahid Shaqaqi on September 4, 2019. Four days later, on September 8, when they reported in, they found out that their bail bond had increased. They gained their temporary freedom by paying the bail.

Mmes Nasirian and Shaqaqi had been arrested in April 2019 and detained for a month before being released on bail.

Mahboubeh Farahzadi, retired teacher and a member of the Voice of Iranian Women Association, was also summoned on September 3, 2019, to the Prosecutor’s Office of Evin and was interrogated there for several hours on September 8, 2019.

Another member of the Voice of Iranian Women Association, Maryam Mohammadi, was arrested on July 8, 2019, in Garmsar and taken to solitary confinement in the Intelligence Ministry Ward 209 in Evin Prison. She was confined for a month in solitary and subsequently transferred to the Women’s Ward. Ms. Mohammadi was a political prisoner in the 80s. She was arrested in 1981 at the age of 14 and remained in detention until 1989. She has two daughters, 16 and 26 years old.

Esrin Derkaleh, another member of the Voice of Iranian Women Association, was arrested in Garmsar on July 28, 2019, and taken to Ward 209 of Evin Prison. She was born in 1983 and is the mother of an 18-year-old.