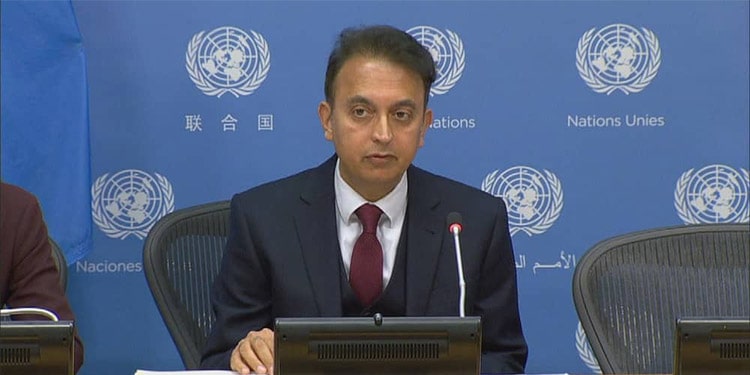 “The overall picture of the human rights situation in Iran remains grim,” the Special Rapporteur on the situation of human rights in Iran told the Third Committee of the U.N. General Assembly on October 25, 2021. He added, “I regret that my access to the country in line with the terms of my mandate as established by the Human Rights Council continues to be denied.”

Professor Javaid Rehman provided an overview of some of the key areas of concern regarding the human rights situation in Iran with a focused examination of concerns arising from the legal framework for and implementation of the death penalty.

The right to life and deeply flawed judicial processes

“In the Islamic Republic of Iran death penalty continues to be implemented at an alarming rate,” said Prof. Rehman, adding, “The absence of official statistics and lack of transparency around executions means that this practice escapes scrutiny resulting in serious abuses preventing accountability.”

The clerical regime in Iran is the chief executioner of women. It has executed an average of 15 women every year during the presidency of Hassan Rouhani and Ebrahim Raisi. The number of executed women reached 122 on October 27, when a 31-year-old woman was hanged in the Central Prison of Qazvin.

Prof. Rehman urged the Iranian regime to initiate reforms in the death penalty area, starting most urgently with a moratorium on the death penalty against child offenders. “My mandate stands ready to engage with the Government on this issue, and I encourage Member States to actively pursue this in their engagement with Iran.”

A serious impediment for improvement of the human rights situation in Iran consists of persistent impunity for serious violations of human rights law, said Javaid Rehman in another part of his speech.

“The situation is aggravated by the fact that individuals who face allegations of being involved in the commission of serious human rights violations remain in powerful positions, including at the highest level of public office. The presidential elections in June this year clearly highlighted this point.

“This report raises concern that the basic pre-requisites for political pluralism and free and fair elections do not exist in law or practice in Iran.

“Other factors contributing to impunity include the alarming level of intimidation or persecution of those who call for accountability. My mandate notes with concern the high number of acts of reprisals undertaken by security and intelligence agencies against families of victims, human rights defenders, lawyers, journalists and others calling for accountability.”

The continued use of lethal force against peaceful protesters

Mr. Rehman further elaborated on the continued use of lethal force against peaceful protesters as the “characteristic of the authorities’ approach to the exercise of the right to peaceful assembly.”

“We witnessed in July this year the use of lethal force against unarmed people in a desperate situation, protesting the dire lack of a basic right – the right to water – in the province of Khuzestan. At least nine people, including one minor, were killed and a large number injured following the authorities’ use of live ammunition. Monitoring of the event was challenging, as the internet was shut down and access to information limited.

“The use force in Khuzestan falls into the long line of similar events showing the use of lethal force against protesters, including the emblematic case during the nation-wide protests in 2019, resulting in at least 304 deaths, which continues to be marked by impunity.”

Violence in prisons and detention centers

“State violence extends to places of detention, including through the widespread use of torture against detainees, which in many cases have amounted to arbitrary deprivation of life. Since the report’s finalization, there have been several more cases of death in detention….

“The leaked videos of abuse of prisoners in Evin prison brings clear evidence of the widespread use of violence in prisons.”

Arbitrary detentions, a tool of suppression

“Arbitrary detentions remain a widespread tool of suppression, targeting in particular those defending human rights, dissenting voices, advocates for minority rights, environmentalists, journalists and lawyers. I remain deeply concerned by the arbitrary detention of what has become a long list of dual and foreign nationals on unsubstantiated national security grounds…

“The report highlights a heightened targeting of minority groups and advocates of minority rights. Discrimination against ethnic and religious minorities continues, and the report notes the high number of executions of individuals from minority communities.”

The final part of the UN Special Rapporteur on the situation of human rights concerned the high death toll suffered by the Iranian people because of the Iranian regime’s politicized and isolationist approach.

“The Iranian population continues to be greatly affected by the COVID-19 pandemic. The authorities’ vaccination policy, including the ban on the import of several internationally recognized vaccines, reflected a politicized and isolationist approach, based on considerations other than that of public health and against the advice of the country’s own health experts.  Iranian people have paid a very high price with an excessive number of deaths…

“I underline the importance of transparency in this process and for accountability for the devastating results of the initial policy. The Iranian Government has the primary obligation to protect the right to health.”