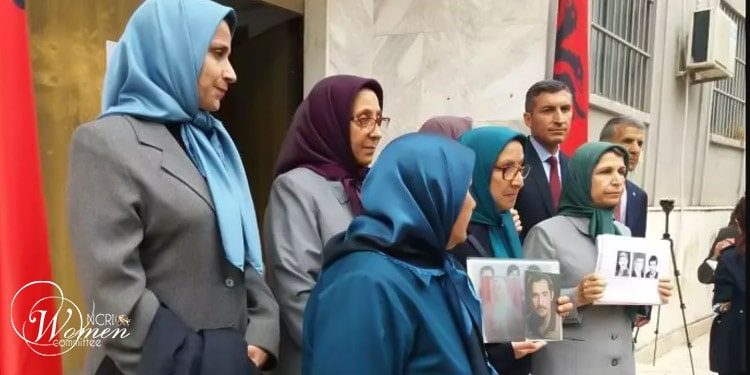 In an unprecedented move, the Swedish Court trial of Hamid Noury, one of the perpetrators of the 1988 massacre in Iran, has moved to Durrës Province, in Albania, for ten days to hear key witnesses to the killings.

The witnesses are former political prisoners and members of the opposition People’s Mojahedin Organization of Iran (PMOI/MEK) who reside at Ashraf 3, in Albania.

All six judges, two prosecutors, the translators, and Noury’s lawyer have traveled to Albania. The court hearings in the trial of Hamid Noury take place from November 10 to 19, 2021.

The court started its proceedings on Wednesday, November 10, 2021, with the testimony of Mohammad Zand, a PMOI member and former political prisoner for 11 years, from 1980 to 1991. His brother was among the victims of the massacre in the summer of 1988.

Simultaneous with the first court hearing in Durrës, several plaintiffs and former PMOI political prisoners held a press conference outside the court building.

They included Mmes. Mehri Hajinejad, Dr. Khadijeh Ashtiani, Mahnaz Maymanat, Farideh Goudarzi, Khadijeh Borhani, and Parvin Firouzan. Damona Taavoni, whose father was among the victims of the 1988 massacre, was also present. They had interviews with Albanian and international media.

Mohammad Zand testifies during the trial of Hamid Noury

In his testimony before the court, Mohammad Zand said, “My brother (Reza Zand) was 21 and a student of technology. He and his friend, Parviz Sharifi, were arrested in September 1981. Parviz was sentenced to life in prison, and Reza received ten years, but they were both executed in 1988.

“Before his execution, we had visitation with my mother. He told her, ‘you will not see me again. The regime will not let us out.’

“On July 30, a revolutionary guard walked into the ward and called out the names of eight people, including Reza.

“Several days later, they called my father and told him to come to Evin with Reza’s birth certificate. He did not take the birth certificate with him. There, they gave him a bag, a shirt, and a watch. Reza had crushed his watch so that it would stop at 2 o’clock, showing the time he was executed.

“My father asked, ‘Why did you execute my son? I won’t give you his birth certificate!’ For saying so, they blindfolded my father and took him inside. To frighten him, they took my father three times for mock execution. My father told them, ‘Kill me. I will join my son!’”

Hamid Noury, 60, has been on trial at the Court of Stockholm since August 10, 2021. His various charges include murder, crimes against humanity, and war crimes. He served as an assistant to the deputy prosecutor of Gohardasht Prison in Karaj, west of Tehran.

The Swedish Judiciary arrested him in November 2019, when he traveled to Sweden to visit his family.

Call for Justice for victims of the 1988 massacre

The clerical regime executed more than 30,000 political prisoners in the summer of 1988 during a massacre, which started in late July and continued for several months in prisons across the country. The prisoners were executed after summary trials lasting only a couple of minutes. Most victims were buried secretly in mass graves. More than 90% were members or supporters of the main opposition People’s Mojahedin Organization of Iran (PMOI/MEK).

The clerical regime had never admitted the massacre, and the perpetrators have remained in power with impunity.

The trial of Hamid Noury is very significant, mainly because the regime’s incumbent president, Ebrahim Raisi, was one of the four members of the Death Commission in Tehran. He ordered the executions of thousands of prisoners. All leaders and officials of the clerical regime have been involved in the 1988 massacre.

Some prominent jurists have described the 1988 massacre as a “genocide.” The massacre is also recognized as the worst crime against humanity since World War II.

In his first press conference after taking office, Ebrahim Raisi defended his role in the 1988 massacre.

Simultaneous with the beginning of the court hearings in Durrës, PMOI members in Ashraf 3, and supporters of the Iranian Resistance in Stockholm, held rallies declaring support for the Call for Justice Movement and calling for the prosecution of the clerical regime’s leaders for committing crimes against humanity and genocide of the PMOI prisoners.