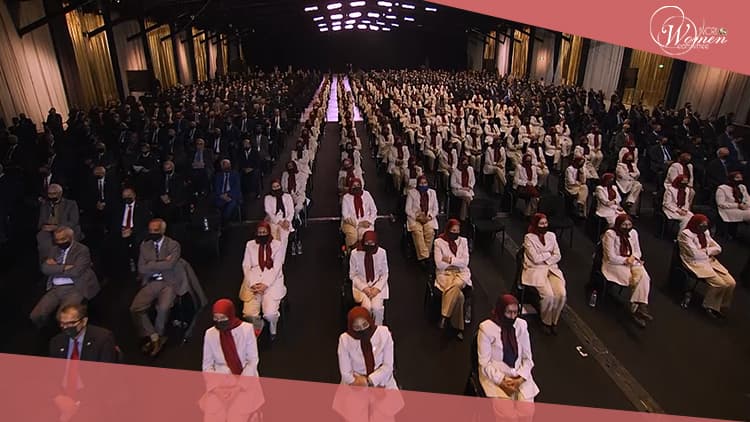 Simultaneous with Hamid Noury’s trial proceedings in Albania, former political prisoners took part in a historic gathering at Ashraf 3 on November 14, 2021. Several of them addressed the meeting, covered by the local and international press. They spoke about their experience during the 1988 massacre and provided information on the heroes of the 1988 massacre.

Before the meeting, reporters visited the Iranian Resistance’s Museum at Ashraf3 and prepared reports about the reconstructed scenes of the massacre.

Ms. Massoumeh Malek Mohammadi chaired the historic gathering of 1,000 former political prisoners of the Shah and the mullahs. She said, “Today, we have 1,000 former PMOI political prisoners with us who have collectively spent thousands of years in the prisons of the Shah and the mullahs’ regime. Two hundred and twenty (220) of us are PMOI women. Many of my friends have witnessed the massacre in various prisons. Many of us have served 10, 15, or even 17 years in prison.

“We have been through Evin, Gohardasht, Qezel-Hessar, Tabriz, Urmia, Kermanshah, Semnan, and Zahedan. Tens of thousands of our friends and comrades were executed in the 1980s or among the heroes of the 1988 massacre. Having inherited the legacy of the heroes of the 1988 massacre, the November 2019 protesters and Resistance Units have sounded the death knell for the clerical regime.

The massacre of the summer of 1988 is considered the greatest massacre of political prisoners in the contemporary era. The policy of appeasement contributed to the cover-up of the genocide. Moreover, the perpetrators of this unprecedented crime have escaped punishment.

The perpetrators and masterminds of the 1988 massacre have not faced justice. They continue their crimes against humanity as they hold the highest government positions. Of course, there is no illusion about justice in Iran until the Iranian people and Resistance overthrow the clerical regime.

In a criminal decree, Khomeini wrote that all prisoners who stand their ground in loyalty to the PMOI/MEK must be executed, regardless of the stage (of prosecution). Accordingly, 30,000 political prisoners were executed. Ninety percent of them were from the PMOI/MEK. Therefore, the PMOI sits in the epicenter of this genocide and this great crime of contemporary history.”

Monireh Rajavi could not even write her name on her bags

In recalling parts of her observations in prison, Ms. Malek Mohammadi said, “I was arrested in 1982 and incarcerated in Evin Prison. I spent time alongside Ashraf Ahmadi, Parvin Haeri, Azam Taq-Darreh, Zohreh Einolyaqin, Razieh Ayatollah-Zadeh Shirazi, Mehri Derakhshani-Nia, a 16-year-old high school student, Fariba Omoomi, and Maryam Tavanaiyan-Fard. These heroes laid down their lives for Iran’s freedom in the summer of 1988 by remaining loyal to the ideals of the PMOI.

“I would like to recall one of the heroes of the 1988 massacre, Monireh Rajavi. She was my cellmate for some time. Monireh was the only prisoner who could not say her last name. She was not even allowed to write her name on her bags because the henchmen feared the name of “Rajavi,” and they still do. Hearing the name “Rajavi” from loudspeakers inspired the prisoners, so the henchmen never called her name. Every time it was Monireh’s turn for interrogation, they would come and drag her out. Her two young daughters were imprisoned along with her. She was not allowed to write her name on her belongings or even her children’s powder milk.”

Homa Jaberi was one of the speakers in the gathering. “I was 18, a high school student, when I was arrested during the demonstration on June 20, 1981. I received a prison sentence of 1.5 years but remained in detention for 5.5 years in Evin, Gohardasht, and Qezel-Hessar prisons. Today, I would like to speak about the resistance of PMOI women, which I witnessed.

“The clerical regime’s prisons have dreadful conditions, in general, but the conditions are especially more horrific when it comes to women.

“Although in the eyes of the mullahs, women are not entitled to any rights, they have double rations when it comes to torture and oppression.

“Thousands were arrested on June 20, 1981. They executed some groups on the same night without verifying their identities. They took a group of us to the deserts of East Tehran for mock executions. Then they took us to Evin Prison.

“In 1982, in Qezel-Hessar Prison, they packed every 28 to 30 of us in a cell made for two or three inmates. We had to take turns to sit or sleep. There were no accommodations. We lived like that for eight months, but our spirits were high. (Assadollah) Lajevardi (the Butcher of Evin) realized that being together keeps us spirited, so in mid-1982, they took us to solitary confinement in Gohardasht. After a few months, Lajevardi came to our solitary cells and asked, ‘Don’t you have anything to say?’ He wanted us to repent. I told him, ‘We don’t have anything here.’ He replied, ‘you, hypocrite! You will stay here until you rot!’

“The conditions were very harsh, absolute silence. They punished you for any petty excuse. We had nothing but a plate, a spoon, and a glass. Despite the cold weather in Karaj, there was no heating. The food was scarce. They kept us in those cells for two years.

“In 1983, they set up a secret prison in Qezel-Hessar, which contained the Residential Unit and the Cage, and nobody knew about it. We just saw that some prisoners had disappeared. Certainly, you have read about “the cage” in the books written by our sisters, Hengameh (Haj Hassan) and Azam (Haj Heydari).

“The conditions were horrible. Prisoners were blindfolded all the time, sitting in deafening silence, without moving. The henchmen tortured them every night. Then, they took a group of us to the Residential Unit. They made us wear the (head-to-toe) chador and blindfolded us. In absolute silence, we had to stand facing the wall. We were allowed to sleep once every few days. They attacked and tortured us several times during the day. If you made any noise under torture, a group of them would viciously beat you.

“Some of our sisters, detained there for 14 months, lost their mental balance due to physical and mental pressures. Those who survived this unit were executed in the massacre of the summer of 1988.

“The question is why they were so vicious? Because they wanted to force us to repent or kill us and erase us from Iran’s history. In 1979, Khomeini had declared, “our main enemy is the PMOI/MEK.”

In the end, I would like to pay tribute to my sisters, the heroes of the 1988 massacre. Shekar Mohammadzadeh who was a nurse. Farangis Mohammad Rahimi, Ashraf Fadaii, and Tahmineh Sotoudeh, a high school student paralyzed in one leg since birth and were executed.”

Former political prisoner Hassan Zarif also spoke about PMOI women. In part of his speech, he recalled, “On Friday, July 29, 1988, they took me for interrogation to (the Intelligence Ministry) Ward 209 over the strikes in our ward. On my way, I saw around 70 to 80 blindfolded prisoners from the women’s ward who were being taken to solitary cells on the first floor. At night, I contacted the second-floor prisoners, who had been arrested and detained for the second time. I heard a sister from the first floor contacting us with Morse. ‘My name is Shahin Panahi, and I am in the same cell with Zohreh Haj Mir-Esmaili. In the evening, Mortazavi (one of the henchmen) rounded up everyone charged with supporting the PMOI and brought us to the solitary. They have brought all of us except for a few Marxists.’

“Shahin told us, ‘Yesterday, they took away some of the prisoners to solitary cells. Monireh Rajavi (Massoud Rajavi’s sister), Maryam Golzadeh Ghafouri, Zahra Falahat, Homa Rahmanesh, and others. We have no news on them.’

“After a couple of days, I found out that there was no one left on the first floor where our sisters were detained and the second floor where the PMOI couriers and the second-time detainees were kept. I lost contact with these two floors.”

Hassan Zarif added, “I was not taken to the Death Commission. When I returned to the general ward in October, I found out a massive massacre carried out in Evin. From the three wards that held around 250 women, only half a ward had survived who were mostly Marxists.”

Ms. Massomeh Malek Mohammadi concluded the event with the following remarks. “Khomeini had decided to eradicate the PMOI generation from Iran’s history in the very first months of his rule. As you testified, the only crime of the heroes of the 1988 massacre was that they did not repent. They did not fear for their lives, so they paid the ultimate price to defend the cause of the PMOI and the Iranian people’s freedom.

“In this unequal battle, the PMOI was not eradicated despite the mullahs’ desire but made further advances. There is no doubt that we will continue our campaign until all these murderers, including Khamenei and Raisi, face justice. The call for justice is a part of the Iranian people’s quest for the overthrow of the clerical regime.”

Tens of thousands join the farmers of Isfahan, demanding their water share