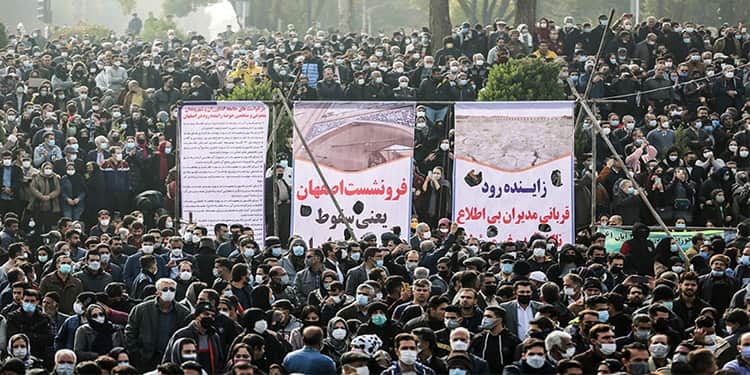 Thousands of people including many women of Chaharmahal and Bakhtiari, and Isfahan continue to protest the lack of water and mismanagement of the clerical regime.

The people and especially the women of Chaharmahal and Bakhtiari marched and held protests in Shahrekord, the province’s capital, for the fourth consecutive day on Wednesday, November 24, 2021. Women play an active role in these protests and call for the protests to continue.

In front of the governor’s office, the women of Chaharmahal and Bakhtiari chanted, “Governor, governor, helpless servant,” “Our enemy is right here, they lie when they say it is America,” and “The government itself is the mafia, death to the mafia.”

Security forces tried to prevent the protests from spreading. By taking control of the speech platform and its microphone, they attempted to prevent anti-government chants. The plainclothes agents clashed with the people and threw them off the platform. But the demonstrators continued to march, chanting anti-government slogans and marched to the governor’s office.

“Unless the water problem caused by the mismanagement of the Islamic Republic and the water mafia is resolved, we will not give up for a moment and leave the square,” the demonstrators vowed.

At the same time, the protest sit-in of Isfahan farmers with the support of the people continued for the fourteenth consecutive day in the Zayandehrud riverbed.

Both women farmers and other women in Isfahan province actively participate in this protest and give speeches.

On Wednesday, November 24, 2021, the speakers included a woman who called on the people of different provinces to unite, show solidarity, and confront the divisive tricks of the clerical regime.

The security forces tried to tear down the sit-in tents of the farmers and collect their banners. However, they were forced to leave the scene with the farmers’ resistance, who enjoyed the support of the locals.

The wrong policies of establishing Mobarakeh Steel in 1991 in Isfahan and Alloy Steel in 1999 in Yazd were among the measures that led to the destruction of water, wrote the state-run press. (The state-run Mostaghel newspaper – November 22, 2021)

The production of each kilo of steel consumes about 30,000 liters of water. In addition to the drying up of the Zayandehrud River, groundwater aquifers are also at high risk of drying out. (The state-run Setareh Sobh newspaper – November 22, 2021)

Of course, the clerical regime’s media and newspapers do not write about the nuclear and missile industries, which are located in the same areas and consume a large amount of Zayandehrud’s water.