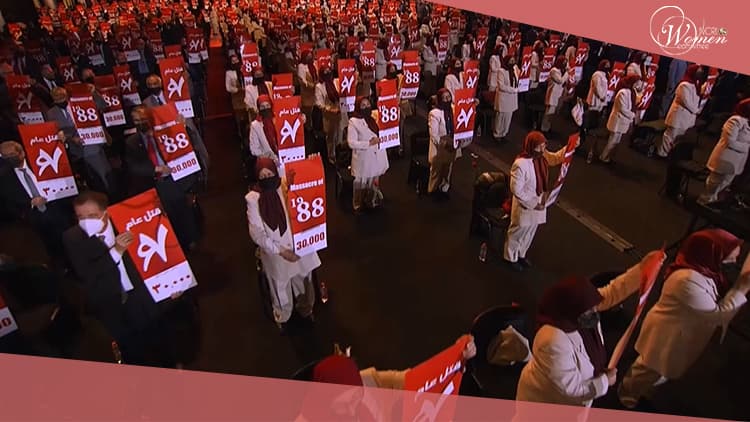 The report on the historic meeting of 1,000 former political prisoners at Ashraf3 on November 14, 2021, continues with the speeches of three female political prisoners. They spoke of the horrendous crimes against PMOI women committed during the 1988 massacre.

The meeting took place simultaneous with the court hearings in Durrës as part of the trial of Hamid Noury, one of the massacre’s perpetrators.

Ms. Parvin Firouzan served 9.5 years in Evin, Qezel Hessar, and Gohardasht prisons. In parts of her remarks, she told the gathering:

“I was arrested in July 1981. I witnessed the massacre of my sisters in Evin Prison. Not much has been said about this, so far. At the time of the massacre, I was confined in a three-story building called Amouzeshgah (the training center). The authorities rounded up all the newspapers and stopped all visitations in late July. They took away all televisions.

“At 11 p.m. on July 27, 1988, they suddenly called out the name of four persons through the loudspeaker. Zahra Falahati, Mahboubeh Haj-Ali, Farangis Mohammad-Rahimi, and Forough. They took them away with all their belongings, something peculiar at that time of the night.

“They took away more people on the following days, including those who had long prison sentences or had finished serving their sentences, as well the sisters who were confined in closed-door cells (not permitted to leave their cells).

“In early August, they transferred me to solitary confinement. Then, they took us to the corridor of ward 209, which was the ‘death corridor’ at Evin Prison. They had us sit down facing the wall outside the court. I was blindfolded and I could not see much but from the sounds I heard, I realized that the place was very crowded. Therefore, they did not take us to the ‘court’ and returned us to the solitary cells.

“A month later, when we were relocated from solitary confinement to a closed-door room, we saw that from the prisoners confined in five closed-door rooms, only one had survived. Some of my friends told me that they had executed everyone. All the evidence proved this but it was difficult to believe. I still cannot believe that all my friends and comrades were killed in such a short period. Unfortunately, because of the rapid pace of the executions, we still do not know the names of many of the victims.

“I can remember the names of only 100 of the sisters I spent time with, in different wards. For seven years, they endured vicious tortures round-the-clock in the residential unit, for nine months in the cage, for long periods in solitary cells, etc. Now, those heroes who had suffered so much had to pay the price of preserving their identity as a supporter of the PMOI.

“All of them were heroes. Tayyebeh Khosro-Abadi was paralyzed in both legs from birth. She had finished her prison term but was executed. Tayyebeh said, ‘My identity is none but being a Mojahed (PMOI). I want to stay with them, and I will remain steadfast until the last moment.’

“Ashraf Fadaii had received her freedom verdict but the authorities did not release her. Before attending the court (the Death Commission), Ashraf said, ‘I will defend the organization (PMOI) and I will die as one of them.’

“Mojgan Kamali and Fazilat Allameh loudly declared before their execution, ‘First they will flog us and then kill us.’ They defended their cause with all their might.

“Before leaving the ward, Mahboubeh Safaei told us, ‘If any of you survived and could join the PMOI, tell them that I will not betray our leaders, Massoud and Maryam (Rajavi) to the last moment.’

“The preparations for the massacre went back to 1987. Time and again, I had heard from Mojtaba Halvaii while he was torturing our sisters who said, ‘We killed a generation of you in 1981. We will annihilate your next generation, too. We will not let any of you survive.’

“To my brave sisters I say, ‘your generation triumphed! Today, you are present wherever there is a cry of resistance and perseverance. Your path continues until our nation achieves freedom. We renew our pledge not to relent until all the perpetrators of this massacre face justice.”

Former political prisoner Mahin Latif was also among the speakers of the meeting. She has written her prison memoirs in a book, “If the walls could speak,” in which she describes the horrendous crimes against PMOI women in the clerical regime’s prisons.

“I started my activities with the PMOI along with my three sisters and my brother in 1979. I was arrested in April 1982 and was detained for about six years in Evin Prison, until March 1988. I spent 1.5 years in solitary confinement in Ward 209 and in solitary cells called ‘Asayeshgah (dormitory).’

“One of my sisters, Farzaneh Latif, was arrested in a street protest in 1981 and a week later, she was executed at Evin Prison without giving her name.

“My other sister, Parvaneh, was arrested on June 20, 1981. She was imprisoned in Qezel-Hessar and Evin prisons for six years. My only brother, Ali Akbar Latif, was arrested in 1981 when he was 24. He received a sentence of eight years. He was executed during the 1988 massacre in Evin Prison because of his decisive positions against the regime while only a few months of his sentence remained.

“Among the heroes who paid the ultimate price for freedom was a generation of enlightened women who chose to pay the full price of freedom for Iran and all Iranians.

“One of these heroes was Azadeh Tabib; she had been tortured so much that her legs were all lacerated and deformed. She did not even whine under torture. Her torturers had become desperate. They beat her and told her: ‘We don’t want any information from you. We just want you to scream,’ but they did not hear even the slightest sound. Azadeh was executed during the 1988 massacre.

“Sima Hakim-Ma’ani was hanged by her hands tied in the back which broke both of her arms. When the torturers brought her down, she could no longer use her hands. Until the time of her execution, she could not do her personal chores.

“Dr. Minoo Omrani was arrested along with her daughter on May 2, 1982. Qazaleh was only three or four years old. Minoo ran away to evade being arrested. The Revolutionary Guards shot and wounded her. They tied a wounded Minoo to the torture bed in front of her daughter. When they lost hope in extracting any information from her, they sent her to the gallows in such dire condition.

“These are only a few of thousands of examples of the horrendous crimes against PMOI women. All but a few hundred were massacred in 1988. My courageous sisters, Forouzan Abdi, Bibi Hamdam Azimi, Farangis Keyvani, Maryam Saghari, Monir Abedini, Mojgan Sorbi, Homa Rudmanesh, and thousands more.

The victims included some of Iran’s most precious human assets

The next speaker was Dr. Khadijeh Ashtiani. Imprisoned for five years in the clerical regime’s dungeons, she witnessed some of the most horrendous crimes against PMOI women. Her brother was among the victims of the 1988 massacre.

“My brother, Mehdi Fat’hali Ashtiani was a victim of the 1988 massacre. He was arrested in 1984 at the age of 19. He was imprisoned in Gohardasht Prison until April 1988. His last visit was on July 25, 1988, when he had told our mother: ‘In the past two days, they have locked up the rooms and taken away the TVs. They do not give us food and tell us, ‘you do not need to eat,’ because we will execute all of you.’ He added, ‘If this happens we will embrace it with open arms.’

“Subsequently, they canceled all visits. Eventually, on November 18, 1988, a Revolutionary Guard came to our house and told us to go and get Mehdi’s belongings.

“The regime did not stop at executions in its bid to exterminate the PMOI. They abducted and killed many of those who had been released. My sister, Maryam Fat’hali Ashtiani, was arrested in 1990. After being released from prison, she succeeded to build her contact with the PMOI and was planning to join the National Liberation Army. She left home on October 2, 1992, and never came back. Her passport was at home with us. Since we did not hear from her, we were sure that she had been arrested. The regime first admitted her arrest but immediately denied it. For 11 months, from Saturday to Wednesday, my mother went to the Prosecutor’s Office, Evin prison, and other agencies and inquired about her fate but they all denied having arrested her. Eventually, on August 30, 1993, Hamid Noury, the henchman who is presently on trial (in Sweden), told my mother, ‘Your daughter wanted to join the PMOI so we killed her.’

“Zahra Niakan, Houshang Mir-Rahimi, and many other PMOI political prisoners were abducted and killed after being released from prison.

Many of the victims of that genocide were among the most precious human assets of Iran. Students, graduates of various fields, specialists, professors, writers, artists, physicians, nurses, medical staff, and medical students. I will read the names of some of my colleagues: Dr. Massoumeh (Shourangiz) Karimian; Dr. Tabibi-Nejad, 55; Dr. Firouz Saremi, 60, from Tabriz who was hanged in public; Dr. Mansour Paydar Arani; Dr. Mohsen Faghfour; Dr. Reza Bahman Abadi; Dr. Mansour Hariri whose family lost five members; Dr. Farzin Nosrati, and many other physicians and medical staff whose names and specifics are recorded in the list of PMOI martyrs.

“The sacrifice made by those heroes guarantees our victory in the fight against religious fascism; the day of victory is not far.”