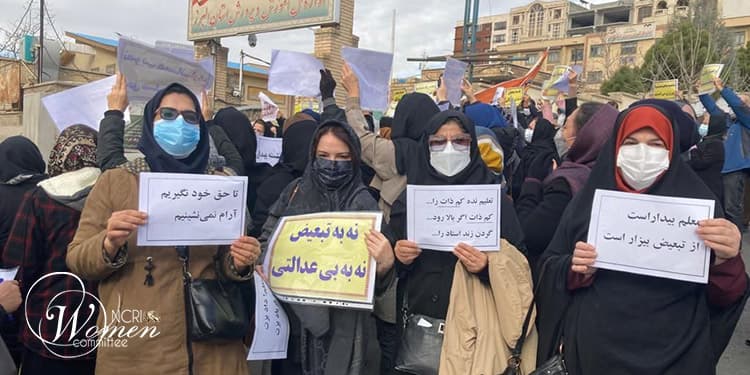 Teachers and educators held another round of their nationwide demonstrations on Thursday, January 13, 2022. They held their nationwide protests and gatherings despite massive security measures and the heavy presence of security forces and plainclothes agents.

By noon, teachers reported their nationwide demonstrations from 116 cities in 30 provinces.

The teachers’ nationwide demonstrations and rallies had been called for in advance.

The teachers chanted: “Free all imprisoned teachers,” “Teachers, rise up to eliminate discrimination,” “We heard too many hollow promises, but did not see any justice,” “The government betrays, the parliament supports,” “Teachers cry out for your rights,” “Teacher dies but won’t accept humiliation,” “Will not step back from ranking,” “Teachers are in prison, thieves are at large,” “Every teacher cries out against oppression of the oppressor,” “Free education for Iran’s children.”

The regime dispatched massive numbers of plainclothes agents, the State Security Force, and female agents to prevent the formation of the teachers’ demonstrations.

In Ahvaz, the State Security Force attacked and brutalized the teachers. They arrested six teachers in Ahvaz, four teachers in Mashhad, three in Bushehr, and several in Tehran and Shiraz.

In September, Iranian teachers geared up their nationwide protests to obtain their legitimate demands for decent salaries and living conditions.

In December, they held three days of nationwide demonstrations in more than 100 Iranian cities.

Most teachers have very difficult livings with wages that are one-fourth or one-third of the poverty line.

In their nationwide demonstrations, Iranian teachers have been demanding the implementation of the Teachers’ Ranking Plan. In reaction to their widespread protests, the clerical regime had the parliament adopt an incomplete plan on December 15, 2021, after more than one decade of foot-dragging. No budget, however, has been allocated to implement the plan. Even if implemented, the small amount of pay raise will do nothing to offer economic relief.

By persisting in their rights, Iranian teachers are teaching the lesson of resistance against oppression and oppressors. So long as the criminal mullahs rule Iran, discrimination, poverty, unemployment, inflation, and corruption persist. They do not care the least for people’s welfare and health but only think of preserving their evil rule.