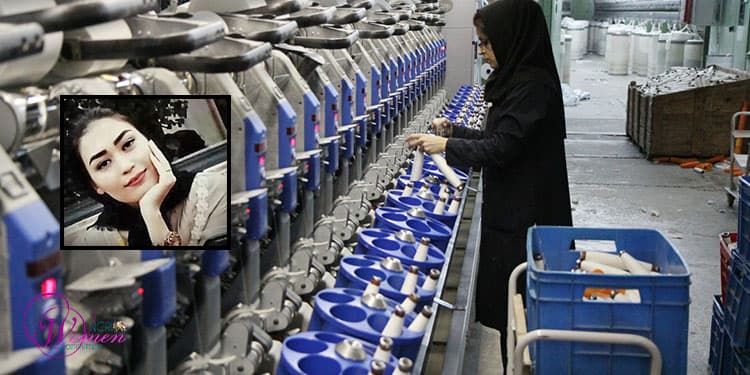 Inset: Marzieh Taherian whose head caught inside the spinning wheel

Iran labor law is not implemented for female workers.

A tragic incident in early November outraged the Iranian public over the fate of female workers in Iran. Marzieh Taherian, a female textile worker, died after her head was caught inside the spinning wheel.

The news by itself is sufficient to shed light on the trampled rights of female workers in Iran.

Many young women must work to help with their family expenses. Numerous others, like Marzieh Taherian must work night hours. Just the day before this dreadful incident, Marzieh had complained about the problems she faced during the night shift. However, she did not live to hear her answer.

No woman will achieve her rights under the mullahs’ misogynist regime, let alone the female workers.

Marzieh Taherian’s case reflects the many challenges female workers face in Iran. While facing few opportunities, many Iranian women have to work to help pay the skyrocketing living costs as more than 85 percent of the population lives under the poverty line.

In such conditions, women have not many options but to accept jobs where their rights are not recognized or respected.

One female worker complained that women must not be considered for nightshifts according to the law. “We must stay for a night shift once a week. But we do not dare say a word,” she said. No government official cares to fix the problems. (The state-run Shahraranews.ir, December 12, 2021)

Iran labor law is not implemented for female workers. For example, the law prohibits the employment of women in hard or hazardous labor, at nightshifts, and for moving heavy loads. Nevertheless, the work conditions for female workers are so harsh that they are rapidly worn out. Under such conditions, they inevitably seek early retirement.

Genuine support for female workers is to implement the labor law and standards for them at work, not to have them retired from physical strain before the due time for retirement.

The labor law is nothing but a scrap paper

Article 38 of the Labor Law prohibits discrimination against women involved in similar working conditions as men. The Iranian laws also forbid giving lower benefits to women for equal work with men. Moreover, certain benefits are considered for female workers in terms of employment and social security.

Article 75 of the Labor Law prohibits hard and hazardous work for women. It is forbidden for female workers to carry out dangerous, laborious, and harmful tasks, or move loads above the permitted limit, manually and without mechanical equipment. The maximum weight to be carried by women is 20 kilograms. Furthermore, taking and moving loads during pregnancy, including ten weeks after giving birth, is prohibited for women.

Employers refuse to pay childcare allowances to mothers who are workers. There are also no nurseries in the vicinity of workshops. Women workers are not given leave during pregnancy. A vast number of women lack job security when pregnant and, in fact, face dismissals. Fearing the loss of their jobs, most female workers do not file any complaints even when they face financial and moral assaults by their employers.

The law prohibits employers from dismissing women workers during maternity leave. Her maternity leave is considered a time off. She then returns to her formal job.

Article 77 of the Labor Law even states that in cases recognized by the Social Security Organization’s physician that a type of work is dangerous or difficult for a pregnant worker, the employer is to assign her to a more appropriate and tolerable job without deducting any of her rights until the end of her pregnancy.

The Iranian regime does not adhere to Iran labor law and fails to recognize the rights of female workers. These oppressed women have only one right, to remain silent and say nothing to avoid being fired.