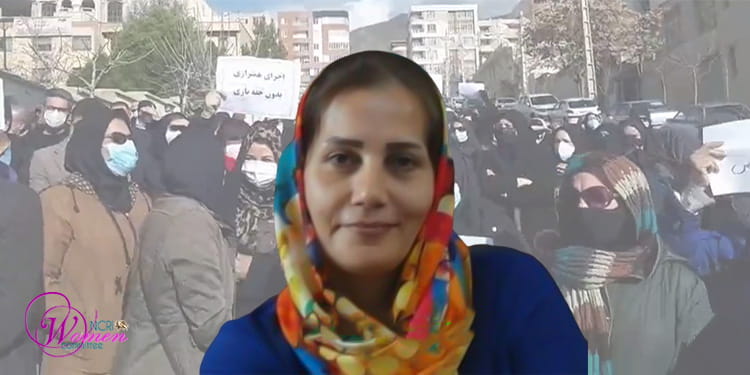 Agents of the Ministry of Intelligence arrested high school teacher Maryam Kabiri as she was leaving her home in Tehran on Sunday, January 13, 2022, the Coordinating Council of the Educators’ Associations announced today.

The Intelligence Ministry agents ransacked Maryam Kabiri’s house and confiscated her and her husband’s mobile phones. Then, they transferred Ms. Kabiri to Evin Prison.

During her detention, Maryam Kabiri has contacted her family only once for a few minutes.

Maryam Kabiri’s relatives said she was seriously ill, but the 6th Branch of the Evin Investigation Department has refused to deliver the medicine to her, despite the family’s insistence.

Teachers have staged several nationwide protests and sit-ins in recent months. Female teachers have played a prominent role in all these protests.

Iranian teachers demand the implementation of the Teachers Ranking Plan, which the regime has not yet implemented. Instead, security forces arrest the protesting teachers and send them to prison.

On Monday, January 17, 2022, the Guardian Council returned the Teachers Ranking bill to the parliament.

“Although the government announced in parliament that it would accept the financial burden to implement the ranking of teachers, it is not accepting it now,” said Monadi Sefidan, chair of the parliamentary education and research committee. (The state-run tejaratnews.com – January 20, 2022)

He added, “The Guardian Council held the bill for about 20 days, but the government did not submit a letter accepting the financial burden for the implementation of the ranking bill (during this period). The government had verbally accepted the budget for this bill during an open session of the parliament. The issue had also been discussed in the meeting of the heads of the three branches … but apparently, the first vice president has not signed to accept the bill’s financial burden.”

Iranian teachers have been waiting for years and demanding the approval and implementation of the Teachers Ranking Plan, hoping to improve their living conditions.

After more than a decade of foot-dragging, the mullahs’ parliament hastily approved a bill on December 15, 2021, in reaction to the teachers’ nationwide protests. However, the Iranian regime has failed to allocate the funds needed to implement the Teachers Ranking Plan.