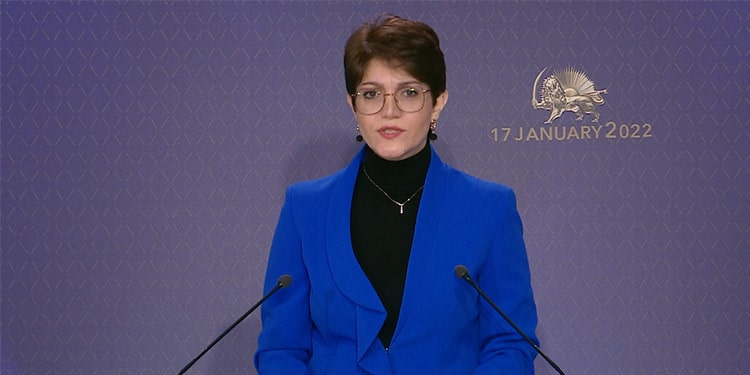 Azadeh Alemi was in jail as a child. She accompanied her mother, a political prisoner. She spoke to a conference on January 17, 2022, featuring international dignitaries, including Guy Verhofstadt, the former Prime Minister of Belgium; Fredrick Reinfeldt, former Prime Minister of Sweden; John Bercow, former Speaker of the UK House of Commons; and Franco Frattini, former Foreign Minister of Italy. The conference was hosted in Auvers-sur-Oise, by the National Council of Resistance of Iran (NCRI) with Mrs. Maryam Rajavi, the NCRI’s President-elect, as keynote speaker.

Following is the text of the remarks by Ms. Azadeh Alemi about her days in jail as a child:

40 years ago, Ashraf Rajavi said, “The world did not find out what happened to our nation.”

Please allow me to open a window from the small world of my memories to what Ashraf said. I want to take you to a solitary cell in the dreaded Evin Prison. To the dark corridor of those bloody dungeons.

It feels strange when freedom is on the other side of the bars.

I was only three years old when I first became acquainted with iron bars. I was with my grandmother. She had no choice. When she was being arrested, she told the guards to take me, too. Her sons from the People’s Mojahedin of Iran (PMOI/MEK) had just been executed, only seven days apart. They were 21 and 25 years old. Her daughter-in-law, 5 months pregnant, had also been executed. My grandfather and father had fled to exile, and my mother was also in prison.

The next time, I was six.

It was only a few hours before I had been arrested with my mother.

Now, I am passing through a dreadful corridor. To my right sit men on the ground with their heads on their knees, all blindfolded.

My mother also has blindfolds and I hold her hand tightly to guide her, with slow and heavy steps. I do not take my eyes off the two plainclothes agents who were walking in front of us.

We enter a room, narrow and long. An agent separates my hand from my mother and takes me to the back of the room, but I still do not take my eyes off my mother.

I answer under my breath, but all my attention is on my mother.

She is standing by a table at the very beginning of the room. The interrogator standing next to her suddenly hit her several times in the head using the tip of a pen and shouted, “The ink of the signature on your release verdict has not dried yet, are you back again? !!!!” My heart breaks. But my mother is calm. After 4 years of captivity, she had been released from prison a month ago and is now standing again before the interrogator.

Azadeh Alemi speaks of her days in jail as a child

This time, we are in another corridor, and I am still holding her hand tightly. My sight slips on her blindfold and back on the path ahead.

The guard accompanying us opens a door. It is a small room, very small, empty with concrete walls. We are alone with my mother. There is some light from a small window above. In the corner, two thin blankets are folded on the floor. My mother spreads one of the blankets. She has removed her blindfold. We rely on the wall and hug each other. No one is with us anymore. We are alone.

I will not leave her for a moment. I’m scared of everything outside her arms, of all that I see and all that I do not see.

I gradually fall asleep. It is dark everywhere. There is no light in the window anymore. Someone pulls me out of my mother’s arms. Someone wants to take her with them. “You have to come, it’s time for interrogation.” And I hide in fear and loneliness.

My mother says those nights with her lasted only two weeks.

But in me and all the other children of those bloody days, those corridors, those blindfolded eyes, those heads down on the knees, those nights, and those being dragged out of your mother’s arms are still there.

In those days, my eyes were the only eyes that did not have blindfolds.

40 years have passed, but the world is still not as aware of what has happened to our nation as it should be. It is up to me and us to narrate the sufferings that have befallen our country. To convey the sufferings of Ashraf and all the victims of the massacre. To convey the resistance of an enchained nation that did not cave in, in the death corridors. Those who kissed the hanging noose, and did not allow the enemy to pull the stool from under their feet.

We need to convey their promise of freedom.

Azadeh Alemi spoke to the conference in Auvers-sur-Oise about her memories in jail as a child.