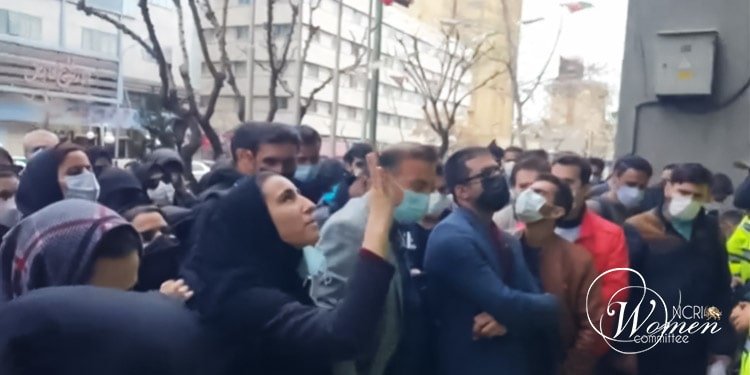 Protests by Iranian teachers in more than 100 cities

Iranian teachers held their protest gatherings in more than 100 cities across the country on Saturday, February 19, 2022, despite massive control by security forces. The nationwide protests by Iranian teachers were held on the first day of the Iranian week.

In Tehran, the teachers held their rally outside the mullahs’ parliament. In other cities, they gathered outside the Department of Education in their cities.

Women were actively present in all the protests by Iranian teachers in every city. The teachers chanted slogans and demanded the freedom of all imprisoned teachers.

Addressing Ebrahim Raisi, the mullahs’ president, and Mohammad Baqer Qalibaf, the speaker of the mullahs’ parliament, the demonstrators chanted slogans such as,

“Raisi, Qalibaf, this is the final message, teachers’ movement is ready for an uprising,”

“From Tehran to Khorasan, teachers are in jail,”

and “Teachers would die but not accept humiliation.”

In most cities, including Tehran and Karaj, the State Security Forces blocked all the roads leading to the gathering place to prevent students and other people from joining the protests of Iranian teachers. They also seized teachers’ mobile phones so that they could not shoot any films from the rallies.

In Karaj, several teachers were beaten and brutalized before being arrested.

In Rasht, the capital of Gilan Province in northern Iran, the authorities took the protesting teachers inside the Department of Education to prevent people from joining them.

The security and intelligence forces arrested at least six teachers, including some women. The spokesman of the Teachers’ League, Mohammad Habibi, reported the arrests of three female teachers in Alborz Province. Their names are Shabnam Baharfar, Azadeh Mokhtari, and Zahra Ajorlou.

The protests by Iranian teachers had a final resolution. They warned in their statement that if their demands were not met, they would continue their protests in various and extensive forms.

The President-elect of the National Council of Resistance of Iran (NCRI), Mrs. Maryam Rajavi, hailed the freedom-loving teachers. They have again risen nationwide with chants of, “This is the final message, teachers’ movement is ready for an uprising,” to obtain their unalienable rights. She added: Hail to women teachers, who, through their protests and defiance against suppression and arrest of protesters, keep alight the flames of teachers’ movement. Hail to teachers in Shiraz, who teach the lesson of freedom to millions of students with their chants of “learn freedom, this is today’s lesson.”