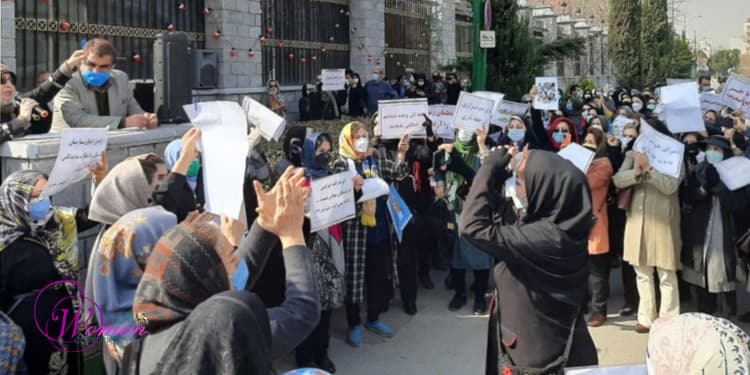 Iranian teachers’ nationwide demonstrations took place in more than 100 cities on Tuesday, February 22, 2022. They chanted, “We are all together; we will stand until victory.”

The nationwide teachers’ demonstrations took place despite threats, preventive measures, and efforts by the intelligence and security forces to prevent or limit their scale.

Iran’s aware teachers and educators gathered outside the mullahs’ parliament in Tehran and the education departments in other cities.

By making arrests, the intelligence forces tried to prevent the teachers’ gathering in many cities, such as Karaj, Shiraz, and Mashhad. They arrested several teachers.

Many students joined the teachers’ nationwide demonstrations on Tuesday, February 22.

On the same day, casual teachers gathered in front of the Education Ministry in Tehran. They spread tablecloths on the floor, a symbolic act showing their food baskets are empty. They chanted: “Enough of hollow promises, our table is empty.”

The teachers’ nationwide demonstrations in 100 cities once again displayed the desire of the public in Iran to rise against the mullahs’ religious dictatorship, the regime of executions, terrorism, and plunder.

The deteriorating living conditions of teachers and other working sectors indicate that poverty, discrimination, high prices, and unemployment will continue so long as the mullahs’ regime is in power.