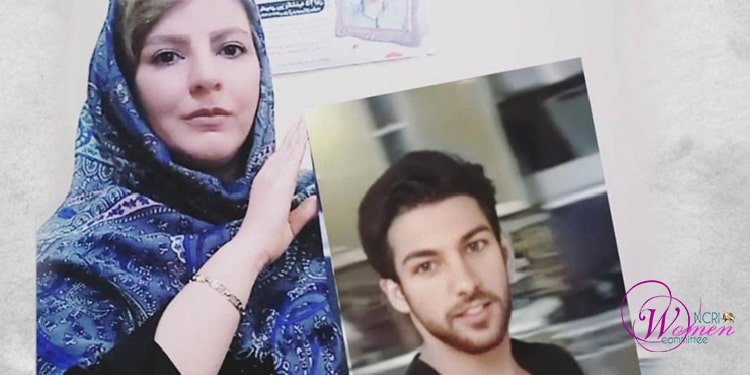 Farzaneh Ansarifar holding the picture of her slain brother, Farzad

After her father and brother’s arrest, the regime security forces battered Farzaneh Ansarifar on February 21, 2022, in the Behbahan Prosecutor’s Office.

Former political prisoner Arash Sadeghi tweeted that Farzaneh Ansarifar’s body was visibly bruised, and she had been hurt in the shoulder.

Farzaneh Ansarifar is the sister of Farzad Ansarifar, who was killed by security forces during the November 2019 uprising in Behbahan. She has been arrested and harassed several times for seeking justice for her slain brother.

Reports on February 23, 2022, indicated that the Revolutionary Court of Mahshahr has handed down a sentence of 4 years and 6 months for Farzaneh Ansarifar. If the verdict is upheld, Ms. Ansarifar will have to serve 3 years and 6 months of it. Her charges included “association and collusion against national security” and “propaganda against the state.”

Mr. Amin Ansarifar, Farzaneh’s father, was arrested on Saturday, February 19, 2022, after his testimony before the people’s court in London, known as the Aban tribunal, investigating the crackdown on the November 2019 uprising.

One day after her father’s arrest, security forces arrested her brother, Arman. Farzaneh was inquiring about their situation when she received a beating from security guards in the Prosecutor’s Office.

The mother of political prisoner Zeinab Jalalian is arrested

Security forces arrested Guzal Hajizadeh, the mother of political prisoner Zeinab Jalalian, after seeking help from human rights organizations to free her daughter. The mother was interrogated and threatened by security forces.

Ms. Hajizadeh said in a video posted on the internet: “They do not allow neither her father and brothers nor her lawyer to visit her. We do not know at all what she did to deserve this punishment.”

In this video clip, she emphasized that she has not seen her daughter for 15 years, adding, “This is the oppression against me. My daughter has not done anything to be in prison for all these years. His father is old.”

The elderly mother also said, “We do not know if Zeinab is alive or dead. We only heard that she had contracted Covid-19 and has no information about her. Only the government knows about her and does not allow lawyers to access her case.”

An informed source had previously stated that the Kurdish political prisoner Zeinab Jalalian had been deprived of any contact with the outside world and her family for almost a year. She is in severe physical and mental conditions, and there is no information available on her health.

Agents of the Ministry of Intelligence have declared that nothing will change so long as Ms. Jalalian does not express remorse in a televised interview.