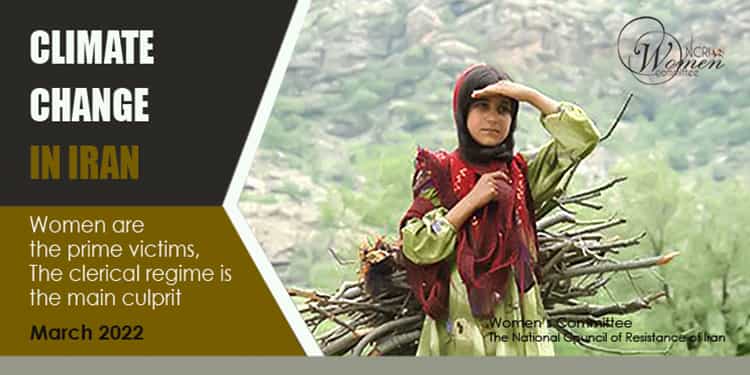 The clerical regime is the main culprit

“Climate Change in Iran; women are the prime victims, the clerical regime is the main culprit,” is a report prepared by the NCRI Women’s Committee for the 66th session of the UN Commission on the Status of Women (CSW) in New York in March 2022.

The report consists of an introductory section on the most important general issues of climate change in Iran, with the following chapters dealing with the impact of climate change on women’s employment, living conditions, and health. In the last section, the report reviews the Iranian regime’s failure to take action with regard to the empowerment of women in Iran.

This year’s theme of the UN Commission on Women’s Status is defined as “Achieving Gender Equality and Empowering All Women and Girls in the Face of Climate Change.”

CSW calls on countries to provide effective programs and policies to reduce the effects of environmental risks and natural disasters on women’s lives.

But the situation and the issue of Iranian women cannot be classified in international norms.

The mullahs have ruled Iran for more than 40 years. A reactionary and totalitarian regime that continues its rule not by relying on serving the people through developing the country, but by fully encroaching on the lives and property of the Iranian people and exporting terrorism to other countries.

The first problem and cause of climate change and natural disasters in Iran is neither greenhouse gases nor industrial activities, but complete destruction of the environment through predatory policies and terrorist projects that exacerbate natural disasters.

According to Ahad Vazifeh, director of the National Center for Climate and Drought Crisis Management of the Meteorological Organization, the trend of temperature rise in Iran is above the global average. In the spring and the winter of 2021, the average temperature of the country was about 2 to 3 degrees Celsius higher than the long-term average, and in some areas, such as the northwest of the country, the temperature has increased between 3 to 6 degrees Celsius. (The official IRNA News Agency – July 7, 2021)

Currently, about thirteen million liters of mazut are daily delivered to Iranian power plants. This number reaches thirty-five million liters during the cold seasons. Metropolitan cities such as Tehran are very polluted due to the practice of burning mazut. Even in the year of the Coronavirus outbreak, when traffic was reduced and many businesses were closed, air pollution in Iran was more severe due to the use of mazut. (The state-run ISNA News Agency – December 12, 2020)

The concentration of sulfur in produced mazut in Iran is about 3.5 percent. The allowed concentration of sulfur even for ship fuel is less than half a percent, according to the law of the International Maritime Organization. Despite the use of this type of mazut, Iranian power plants do not have a ventilation system, and government agencies are sacrificing people’s health pay by not acquiring the proper equipment.

Sulfur particles in the air are especially harmful for pregnant women, children, patients with kidney and lung problems, and the elderly. Severe air pollution can also cause women to give preterm birth.

Oil pollution, the nuclear power plant emissions, the drying up of lakes, wetlands, and rivers, shortage of water, deforestation, and loss of dams and their consequent flooding are among the problems caused by the clerical regime in Iran, which exacerbates the impact of climate change.

The impact of man-made Climate Change on Women’s Health

Due to the lack of government support and institutions for women, especially in remote and suburban areas, as well as the lack of any real, effective, and sustainable plans for women’s empowerment, the burden and harms of climate change and natural disasters have befallen Iranian women.

“Droughts and environmental crises, frequent water cuts, and lack of potable water disproportionately affect women, more than half of the society who have always been subject to oppression,” wrote a government website, Didar, quoting an expert sociologist. (The state-run Didar website – July 21, 2021)

Dehydration deprives women of all aspects of their physical and mental health and along with the lack of opportunities; the repercussions on women’s personal growth and development are even greater.

Another situation women face is carrying and using contaminated water, further increasing injuries and physical ailments especially as droughts persist.  Since under the mullahs’ patriarchy, men are seen as the heads of the household and women are responsible for all household affairs, according to these implicit rules, it is women’s duty to provide water for their homes where tap water is non-existent.

Rural women and girls must refer to wells and water tankers for their water. These waters are polluted and the source of many diseases.

Women and girls are forced to carry heavy containers of water, sometimes for miles, on their backs or on their heads. Carrying heavy loads for long distances results in physical injuries, as they are unable to withstand the weight over the years, especially in horrid weather conditions. No one is even concerned about the age, body type, and physical condition of these unfortunate women. 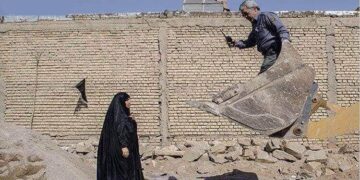