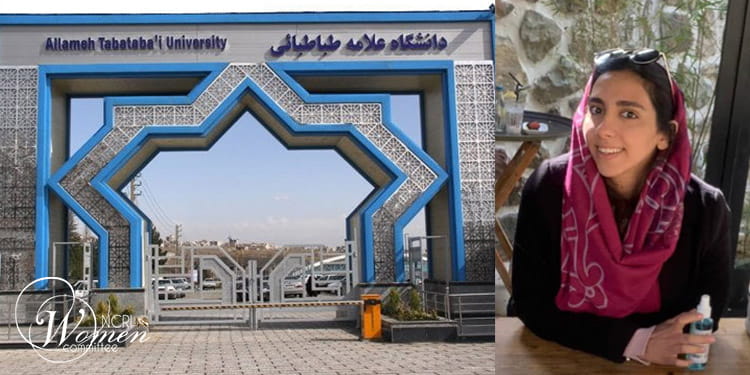 Hasti Amiri, a student of law and a women's rights activist

The Revolutionary Court of Tehran sentenced Hasti Amiri to one year in prison.

Hasti Amiri is a master’s student of law at Allameh Tabatabaii University. She has been charged with propaganda activities against the state, for posting her last year’s photo on March 8 and for tweeting against the death penalty.

She was also sentenced to additional punishments, including confiscating her cell phone, a ban on membership in political and social groups both in cyberspace and on the ground, and a two-year ban from attending student gatherings.

According to her lawyer, Amir Raisian, the public security police raided Ms. Amiri’s residence on January 3, 2022. Due to her absence, however, they verbally informed her family that she should report to Branch 2 of the Evin Prosecutor’s Office on January 8, 2022.

Raisian added that her activities at the university on women’s rights and her posts in cyberspace regarding the right to life and the death penalty are among the charges mentioned against Hasti Amiri.

Security forces arrested Pardis Rabii on Friday, March 11, 2022, and transferred her to an unknown location, announced the student union councils.

Pardis Rabii, 23, is a genetics student and lives in Yazd. She is a women’s rights activist working on honor killings. She was busy compiling a complete encyclopedia on women who have fallen victim to tradition, sharia, and honor killings in Iran.