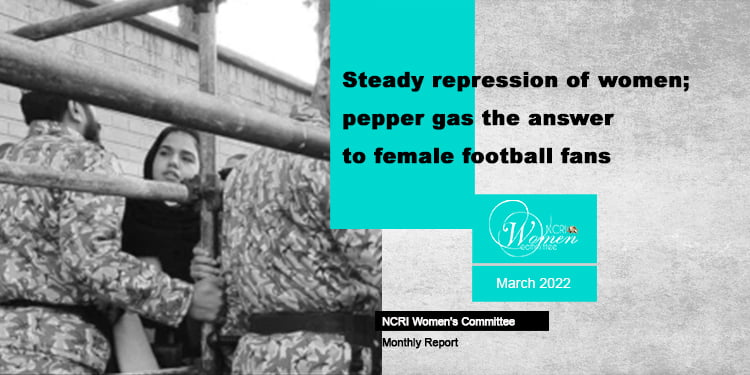 Over the past month, the Iranian regime has intensified its repressive measures and launched a new round of violence against women. In addition to increasing arrests and summoning of women activists and issuing prison sentences for them, the clerical regime carried out specific social measures during March.

Granting new powers to the State Security Force to deal with improperly veiled and unveiled women in the street, banning female musicians from performing in concerts, revoking the licenses of female coaches, and cracking down on protesting female football fans who demanded to enter the stadium were among the most significant examples of these repressive measures.

On Tuesday evening, March 29, 2022, many women and girls in Mashhad went to the Imam Reza Stadium. They held officially purchased tickets to watch the football match between the national teams of Iran and Lebanon. However, the State Security Force did not allow them to enter.

The young women and girls protested outside the stadium but were attacked by the SSF with pepper spray.

According to state media, about 4,000 tickets for the game had been sold to women.

In a theatrical measure, the Iranian Football Federation sold a limited number of tickets for women to participate in the World Cup qualifier between Iran and Lebanon. But on the day of the match, the SSF prevented women from entering.

The clerical regime expected the women to leave the scene when they saw the State Security Force. Confronted with the women’s resistance, the SSF savagely attacked and sprayed them with pepper gas. They also beat the women to prevent them from entering the stadium.

The fact that Iranian women and girls stood up to the SSF and started chanting in protest caused the issue to reach the media and social networks.

Mrs. Maryam Rajavi saluted the courageous women and girls who demonstrated outside the stadium in Mashhad. She said, “Banning women from the stadium and attacking them with pepper gas shows the savagery of a misogynistic regime that has executed thousands of female political prisoners.”

Contradictory remarks about the crackdown in Mashhad

In an interview with the media, the mullahs’ General Prosecutor, Mohammad Jafar Montazeri, admitted to selling tickets to women. However, the Football Federation denied the issue altogether in a statement issued on March 30. The Football Federation announced, “We did not invite women,” and “the conditions in the stadium were not suitable for women to enter.” The federation’s statement attributed the ticket sales to “fake sellers.”

At the same time, the director-general of the Department of Sports and Youth Department of Khorasan Razavi Province implicitly confirmed the sale of tickets. He said that “it was decided at the last minute” to prevent women from entering the stadium.

Ali Akbar Hashemi Javaheri said, “In such competitions, the number of spectators and other issues are instructed from Tehran. We just carried out the decisions that were taken in Tehran. The decision (to prevent women’s entry) was made at the last minute.” (The state-run Asriran.com, March 30, 2022)

Mohsen Davari, the governor of Mashhad, also stated that the decision to prevent women from entering the stadium was “a national decision, not a provincial one.”

In response to a question about spraying the female football fans with pepper gas, the mullahs’ Interior Minister, Ahmad Vahidi, said, “There was a case of pepper spray, but it is not clear who did it.”

Fearing the consequences of the crackdown and in a bid to deceive the public opinion, Vahidi promised to investigate the issue. (The state-run News Network TV, March 31, 2022)

The Iranian women and people, in general, have not tied any hope on the regime’s investigations in this case. As in the case of acid attacks on women, they know that the perpetrators and masterminds of this crime will not be announced or prosecuted.

Fear of women gathering in stadiums

The Iranian regime’s policy was to allow the sale of tickets to women to pretend that it was observing the protocols and mislead FIFA. But in practice, it prevented women from entering the stadium.

Two years ago, on October 10, 2019, during the Iran-Cambodia match, the Iranian regime allowed a token number of hand-picked women to enter the stadium under pressure from the World Football Federation and for propaganda purposes. The measure only followed the self-immolation and death of Sahar Khodayari, nicknamed the Blue Girl, in September 2019.

Sahar Khodayari, who the SSF had arrested for trying to enter the stadium and sentenced to six months in prison, set herself on fire in protest.

On October 12, 2021, a football match between Iran and North Korea teams was held without any spectators at Azadi Stadium. To prevent women’s entry, the regime banned all spectators using the excuse of the Coronavirus pandemic.

Terrified of women’s opposition to their disgraceful rule, the clerical regime prevents any gathering of women that is not under the complete control of its repressive forces.

Another example of the regime’s misogynistic savagery

The clerical regime is concerned about the growing role of women in society. The regime sees its negation and destruction in the presence and participation of women in social struggles and Resistance Units. Iranian women, along with men, have participated in all protests and large-scale uprisings and have played a leading role in many cases. Hence, it systematically and continuously increases repressive measures against women.

Ebrahim Raisi, the regime’s criminal president, left no doubt that the crackdown on women in Mashhad was part of the regime’s official policy. “There was no contradiction in the decision-making in Mashhad,” he said. “Various organs should not act according to their taste; They must follow the regime’s policies.” (The state-run Entekhab.ir, April 1, 2022)

The scandal in Mashhad was a continuation of the official gender discrimination against women, a policy that the mullahs’ misogynistic regime has pursued in various ways for decades.

The Women’s Committee of the National Council of Resistance of Iran (NCRI) strongly condemned the regime’s prevention of young women and girls’ entry into Imam Reza Stadium in Mashhad and attacking them with pepper gas.

The NCRI Women’s Committee said, “This is another manifestation of the brutality of the ruling medieval and misogynistic tyranny that considers women second-class citizens, deprives them of their basic political, social, and economic rights, and has tortured or executed tens of thousands of women political prisoners.”

The NCRI Women’s Committee urged the United Nations Secretary-General, the UN Human Rights Council, the UN High Commissioner for Human Rights, the relevant UN bodies, as well as other human rights and women’s rights activists, to condemn the clerical regime’s repressive actions against women and preventing them from participating in sports.

It called on the International Football Federation (FIFA) and other sports authorities to reprimand the Iranian regime for gender apartheid and ban it from international competition.

Also, on March 31, the Washington Examiner wrote, “(Iran) must be stripped of its right to attend soccer’s 2022 FIFA World Cup in Qatar. Blatantly rejecting FIFA requirements to the contrary, Iran blocked ticket-holding female supporters from attending its World Cup qualifying match against Lebanon on Tuesday. Iran won that game 2-0, thus securing a spot in the World Cup in November. But the scenes in Tehran testify to the intrinsic immorality of Ayatollah Ali Khamenei’s regime.”

The relentless increase in women’s repression under Raisi

The Iranian regime has steadily increased its crackdown on women over the past month.

During a visit to Kurdistan, the deputy commander of the State Security Force, Qassem Rezaii, stated that the Iranian regime’s latest plan to impose compulsory hijab on women was to “deal with the improperly veiled women on the scene.”

“We have to warn those who remove the hijab … but if some people defy the SSF, our officers will have to deal with them,” SSF chief Hossein Ashtari told a news conference. (The state-run Entekhab.ir, March 28, 2022)

What is remarkable about these statements is the “legal authority” of the State Security Force to deal with offenders “on the scene.” Dealing with offenders on the scene in legal terms means carrying out a sentence. At the same time, it is unclear which judicial authority issues the ruling.

According to the laws of the mullahs’ regime, the State Security Force is an enforcement agency. It does not have the authority to judge and issue verdicts.

In another discriminatory measure, the coaching cards of two jumping fitness coaches were suspended.

On the orders of the Director-General of the Department of Sports and Youth of Khuzestan Province, Asieh Denyari and Ameneh Kaabi were suspended from coaching due to the release of a video of women performing jumping fitness on the coast of Mahshahr. (The state-run Aftabnews.ir, March 30, 2022)

In another development, the concert of a group of young performers in Yazd Province was canceled because three of the players were women.

Hamid Aramzadeh, 18, a traditional singer, explained to the audience attending his concert just one hour before its official start that his show had been canceled because of the presence of three women among the players of his band. (The state-run Sharq newspaper, March 30, 2022)

A video clip published on March 29 showed Aramzadeh apologizing with a choked voice that his concert was canceled because his players were women.

According to the clerical regime’s laws, women are not allowed to sing solo or play in public concerts.