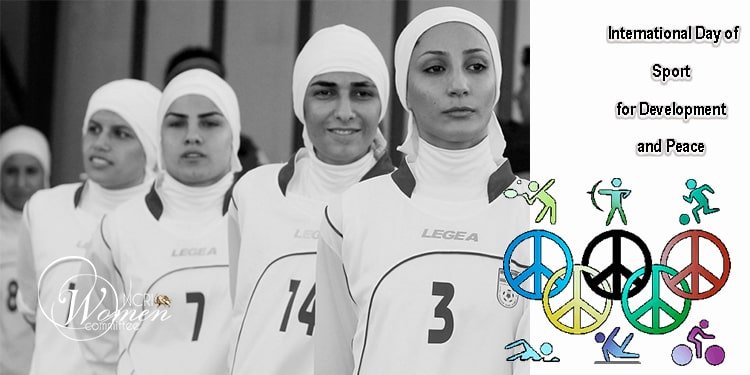 The International Day of Sports for Development and Peace (IDSDP), which takes place annually on April 6, presents an opportunity to recognize the positive role that sport and physical activity play in communities and people’s lives across the globe. This day was established on August 23, 2013, by the United Nations General Assembly.

Creating social change, strengthening peace, understanding society, and achieving equality are challenging objectives that all women worldwide face on the long road to achieving their goals. Today, we see this clearly among Ukrainian women involved in an unjust war. However, Iranian women, unfortunately, face an even more painful reality – they are brave, talented women who have been in the grip of a religious dictatorship for more than 40 years and lack the right to be recognized as ordinary citizens. An important question is how the clerical regime in Iran – whose two main characteristics are misogyny and incitement to war – can take the appropriate steps toward sports, peace, and development.

Women banned from the stadium

Iranian women and girls were attacked and pepper-sprayed instead of being allowed into a stadium to watch a football match.

The misogynistic clerical regime prevented women and girls from entering the Imam Reza Stadium in Mashhad on March 29, 2022. The women had legally purchased tickets to watch the Iran-Lebanon football match (The state-run Asriran.com, March 30, 2022).

According to reports, stadium officials denied women access to the stadium despite selling them the tickets. Videos posted on social media show State Security Force (SSF) pepper-spraying women’s and girls’ faces and heads as they were trying to enter the stadium. Under FIFA and AFC rules, sports officials have no right to prevent women from entering the stadium.

Two years ago, on October 10, 2019, the clerical regime allowed a select few women into the stadium to watch the Iran-Cambodia game. The measure came on the heels of the self-immolation of Sahar Khodayari, also known as the Blue Girl, in September 2019. Sahar had been arrested by the SSF and sentenced to 6 months in prison for attempting to enter the stadium.

Full-fledged opposition of the mullahs to women’s sports

Female athletes in Iran face many obstacles and challenges. They must obtain permission from (corrupt) officials of the clerical government to participate in the international arena and pursue their favorite sports.

The regime has banned women from participating in international competitions in some fields, such as swimming. The women can participate in other areas, such as competitions held outside Iran, if they travel with a hijab approved by the Iranian regime and with the approval of their husbands or fathers.

These are among the official restrictions and institutionalized laws of the clerical regime. Due to these limitations, many female sports champions have been banned from participating in important competitions on several occasions.

Even mountain-climbing and hiking are restricted for both married and single women. The Khorasan Razavi Mountaineering Board announced this directive to the clubs in the province in November 2018.

In addition, broadcasting any women’s sports competition in Iranian media is prohibited. Thus, female sports teams do not receive sponsorships since women’s matches are not broadcast on state television. Only loose-fitting clothing is allowed, even though it can slow athletic movement and prevents Iranian female athletes from competing at their best level.

Empty pockets but a proud will

The Iranian regime, which generally restricts the labor market to women, does not recognize women’s professional sports.

Nastaran Moghimi, a member of Iran’s national futsal team, protested the low wages paid to female soccer players in Iran. During a televised program, she stated, “Our salary is less than one-fiftieth of those of male soccer players.” She continued, “We are in the league for 10 to 11 months of the year, and we cannot do anything else. Even with price increases, our current salary is low.”

This issue was confirmed by Sara Shirbeigi, a women’s futsal team player and a record holder of goals during the Asian Championship. She stated, “When they do not show us on television, no sponsor will be willing to cooperate. Without sponsors, team morale plummets, and wages go down.”

Although the status of Iranian women athletes in the international sports fields is increasing day by day, the restrictions against them are also growing with the enactment of new laws. For example, in a bizarre move, the Ministry of Sports and Youth of Ebrahim Raisi’s government has banned women’s bodybuilding activities in some fields.

All these restrictions stem from the mullahs’ gender perspective on women’s sports and block the path for Iranian women champions to shine (Independent Farsi– March 29, 2022).