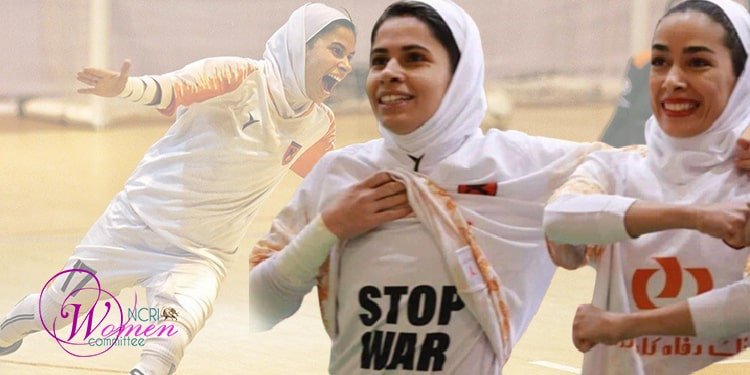 Mahsa Kamali, a member of the Iranian women’s national futsal team, was dismissed for opposing the war with Ukraine.

Ms. Kamali was earlier summoned to the disciplinary committee for declaring her opposition to Russia’s military invasion of Ukraine.

On April 10, 2022, Mahsa Kamali stated that when the technical staff did not invite her to play on the team, she was upset and had not expected it to happen. Mahsa said it affected her very badly.

Mahsa continues that after she was not invited to two- or three women’s national futsal team camps and had asked why the technical staff placed the reason on “youthfulness.” (The state-run ISNA news agency – April 10, 2022)

Mahsa says she will have to wait and see what the women’s national futsal team’s technical staff decide in the future. She hopes to be invited to the camp.

After scoring against the Abadan Oil Refining Team, she uncovered her top that read ‘Stop War.’ She did so during the game held at the Sports Complex in Abadan on March 11, 2022.

Ms. Kamali had reacted to Russia’s invasion of Ukraine and wanted it to stop. This national player’s act was widely reflected on social media and applauded by Persian-speaking users.

The statement added that the action of a member of the women’s futsal team was purely personal and emotional and had nothing to do with the general policies of the Rafsanjan Copper Club.

After releasing the statement, Mahsa Kamali was summoned to the club’s disciplinary committee. Rafsanjan Copper Club’s management announced that “according to the rules and regulations of Rafsanjan Copper Club,” this national player will be dismissed and fined. (The state-run Tabnak.ir website – April 9, 2022)

Mahsa Kamali, 27, born in Zanjan, was on Iran’s women’s national futsal team that reached the 2018 Asian Women’s Futsal Championship. As a player, she has also defended women’s rights.

Women athletes in Iran continue to struggle with numerous obstacles and challenges.