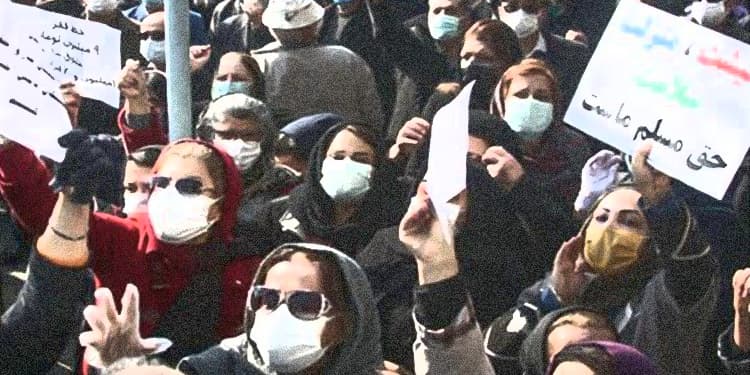 The retirees and pensioners of the Social Security Organization held protest rallies in different cities of Iran on Sunday, April 17, 2022. The protesters, including many women, had their demonstrations outside the Social Security Department in Arak, Karaj, Mashhad, Kermanshah, Rasht, Ardabil, Bojnourd Ilam, and other cities.

The retirees and pensioners of the Social Security Organization protested low wages and pensions, supplementary insurance problems, and poor living conditions. This deprived sector wants their monthly salaries raised and adjusted to the present inflation rates.

The retirees and pensioners of the Social Security Organization expressed their detestation of Ebrahim Raisi’s government in their chants.

The protests came in the wake of serial demonstrations last year by the retirees and pensioners of the Social Security Organization.

Healthcare workers of Lorestan Province (western Iran) held a protest on April 11, 2022. Lack of job security and layoffs of healthcare workers were among the reasons that brought them to the streets. They gathered outside the Governor’s building in Khorramabad, the capital of Lorestan.

Widespread poverty in Iran has reached an incredible scale. The state-run daily newspaper  Farhikhtegan published a letter addressed to Ebrahim Raisi on April 16.

Saleh Torkaman, a member of a state-backed student organization, wrote in this letter: “In the past nine months, your government has not healed any of the wounds of the deprived people. We are concerned that the pressure on the poor would lead to more uprisings similar to the one in November 2019.”