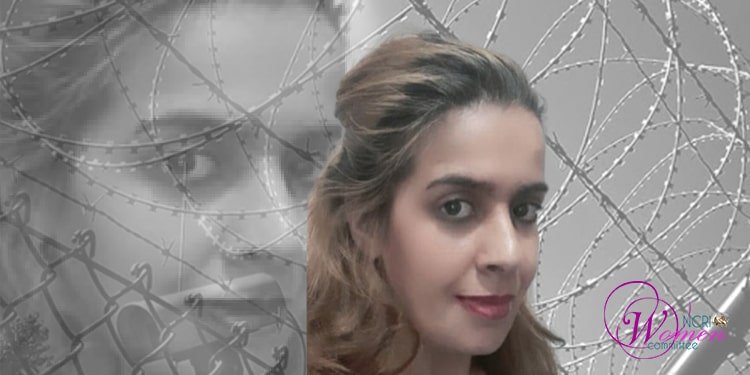 Khadijeh suffers from severe nausea when eating food and even drinking water. She has also lost 8 Kg of weight in just the last two months. However, her prosecutor forbids her transfer to Tehran to treat her digestive disease and the black spot in her eye that appeared in prison.

After a long delay before being visited for her eye, she was sent to a civic hospital. She received a pair of glasses and an eye drop on January 5, 2022, and returned to prison afterward.

Khadijeh Mehdipour is serving a 20-month sentence in Ilam Prison, western Iran, violating the principle of segregation of crimes. A few female prisoners convicted of violent crimes beat her on February 10, 2022. It was then that Khadijeh’s eye was injured.

The Revolutionary Guards’ intelligence agents arrested Khadijeh at her uncle’s house on October 10, 2021. They transferred her to Ilam Prison after two days.

The Revolutionary Court ultimately tried her on charges of “propaganda against the state” and insulting the mullahs’ regime leaders. Under Article 134 of the Islamic Penal Code, she was sentenced to 20 months imprisonment.

Ms. Mehdipour was also acquitted of “sympathizing with anti-regime groups.” According to an informed source, Ms. Mehdipur was told that she would not be eligible for parole and early release because she did not repent.

Khadijeh has another arrest on her record. The security forces in Ilam arrested her on October 3, 2020. The Revolutionary Court of Ilam ordered her to pay 3 million Tomans in cash to avoid being imprisoned.

Khadijeh Mehdipour is 34 years old and a resident of Ilam-e Gharb in Ilam Province.

Golrokh Iraee abruptly transferred out of Amol Prison to Evin