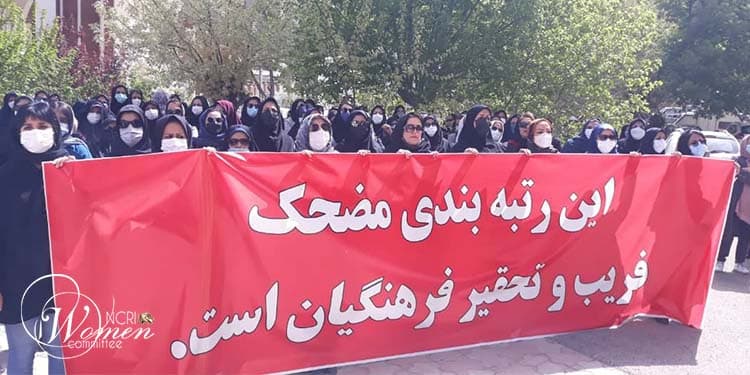 Iran’s teachers and educators took to the streets in a nationwide protest on Thursday, April 21, 2022. The rally had been previously called for and coordinated. Women teachers played an active role in virtually all the gatherings.

The Iranian teachers and educators held their protests in more than 50 cities and 24 provinces across the country, calling for the release of imprisoned teachers and an end to the fabrication of cases against activist teachers.

In this nationwide protest, Iranian teachers demanded the full implementation of the Civil Service Management Law. They said that after implementing this law and implementing a genuine ranking system and adjustment of the salaries, every teacher, retiree, and employee, especially newly hired teachers and informal teachers, should be above the poverty line. They also called for payment of the end-of-service bonuses for the retirees of 2021 and the past-due payments of daily-wage teachers. The teachers also demanded the official and permanent employment of teachers working on temporary contracts.

The right to free and quality education, especially in deprived areas, is another demand of Iranian educators and teachers. In addition to free education for all, teachers are calling for the abolition of ideological education in schools.

According to the news published on the Telegram channel of the Coordination Council of Iranian Teachers’ Associations, which reports live on these nationwide protest rallies, plainclothes forces, guards, and police have cordoned off the entire route from Ferdowsi Square to the end of Qarni Street in Tehran. They did not allow the teachers to assemble and arrested several teachers, including women, in the very first minutes.

In recent months, in step with the escalation of teachers’ and educators’ nationwide protests, security and judiciary forces have been dealing with activist teachers, namely summoning, arresting, and detaining them.

The Coordinating Council of Iranian Teachers’ Associations recently declared in a statement that the teachers’ movement “will not be subdued by these rulings.”

Teachers also chanted, “Free the imprisoned teachers,” “Teachers, workers, unite,” “Government betrays, parliament supports,” “teachers are awake and they abhor discrimination,” “Raisi (the mullahs’ president), Qalibaf (the speaker of parliament) This is the last message, the teachers’ movement is ready to rise.”

In Arak, female teachers wrote on their placards: “Providing free education materials for every Iranian individual -Article 30 of the Constitution.”

Female teachers in the city of Hamedan held a large placard that read, “This ridiculous ranking is for deception and humiliation of teachers.”

Women also had a remarkable presence in the cities of Zivieh and Saqqez in Kurdistan province as well as in Karaj.