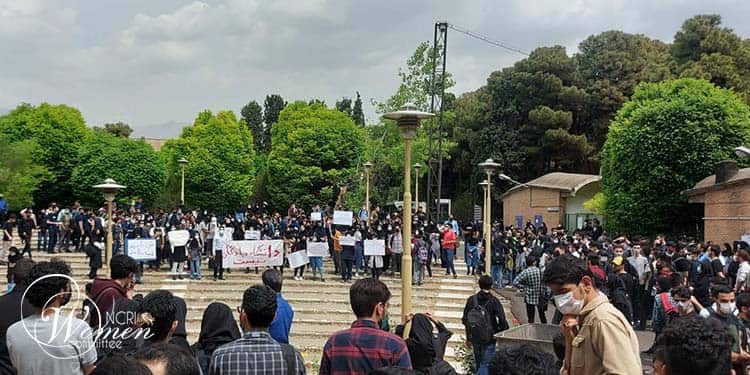 Science and Technology University students: The girls’ dormitory is a prison ward

Hundreds of students at Tehran’s Science and Technology University protested against bullying by the university’s security department on Sunday, April 24, 2022.

They also held placards that read, “The girls’ dormitory is like a prison ward,” “Students are alive,” and “University is not a military barracks.”

One of the protesting students of the Science and Technology University told the students: “Less than two weeks since the university’s reopening, we have witnessed that the security patrols disturb young women about what they wear; they control people in the dormitories, and finally, they recently beat up a student for protesting their acts. Now, the Science and Technology students respond with this gathering, ‘University is not a military barracks!’”

On Sunday, April 24, 2022, some students from Payam-e Noor University in Tabriz also gathered on the campus and expressed their opposition to the in-person final exams.

Declaration of the student of Science and Technology University

Protesting students at the Science and Technology University issued a statement condemning the measures of the university’s security department. The statement read in part:

Two weeks have passed since the reopening of the universities. We have not seen anything but harassment. The university’s security department, which is supposed to protect the students, is disturbing their comfort today more than any other institution. A process that is not limited to the Science and Technology University and is seen in different forms in other universities.

This process is an ongoing project to suppress and neutralize the political potential of universities, not only by intensifying pressures on activists and student organizations and institutions but also through daily pressures imposed on the general student body. Such pressures include expanding the scope of interference in the female students’ clothing and covering even outside the university. They also include creating fear and intimidating first-year students who have traveled miles from their cities to study.

In the meantime, we are fed up with the security department’s performance and its physical protection of the Science and Technology University. This power structure went so far as to collect the statements distributed by one of the student organizations last week. They beat up a student and summoned him to the disciplinary committee, along with several others. And they invited military forces to the university’s campus.

We are no longer in the 1980s when you could compel the students to accept your stone-age views and beliefs by clubs and force. Today, you must accept freedom of choice. The solution is none but accepting it. After the right to life, the right to choose is the most important right of human beings. The students condemn the intelligence forces’ presence in our university and their creation of an atmosphere of fear and terror.”