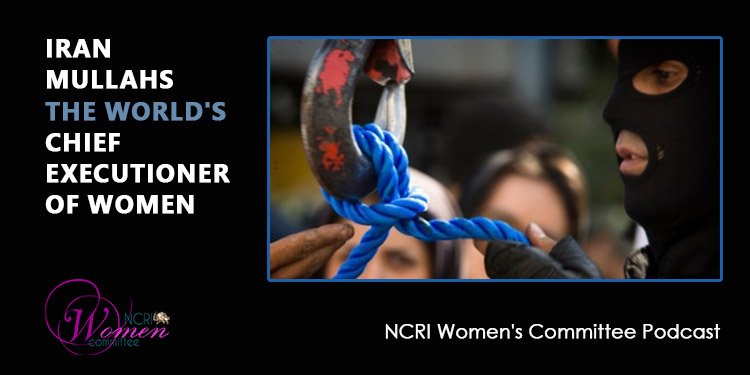 It’s unbelievable but the bitter truth is that the misogynist mullahs’ regime ruling Iran is the world’s chief executioner of women. This is what we are going to discuss today and examine its unseen or untold causes.

The Iranian regime is the chief executioner of women in the world because there is no other country executing so many women every year.

Of course, in this podcast, we are focusing on the death sentences carried out for ordinary women charged with murder, drug trafficking, etc. But the mullahs executed tens of thousands of women in the 1980s, when they wanted to consolidate their rule and eliminate all opposition to the regime.

Those young women had committed no crime but selling opposition newspapers or participating in an opposition rally. The trend continued until 1988, when they carried out the massacre of 30,000 political prisoners within a few months in prisons across the country.

The existing evidence suggests that only a few prisoners survived of the women’s wards in all prisons. In some places, no woman survived at all.

These women were mostly supporters of the opposition People’s Mojahedin Organization of Iran or the Mujahedin-e Khalq, MEK.

After the 1979 Revolution in Iran, this Muslim opposition movement attracted hundreds of thousands of women from all ages and all walks of life. It provided equal opportunities for women and so women found it an ideal place to fight for their rights and the rights of all the people. Today, the leadership of this opposition force is entirely made of women.

The NCRI Women’s Committee has published a pamphlet called, “Execution of women in Iran.” It contains a list of names and dates of these executions. Based on this data, which we have collected since September 2013, the Iranian regime executes an average of 15 women every year.

Last year in 2021, they executed 18 women. And at some point, the executions surged with 7 executions carried out in just one month from November 22 to December 21.

All that happening under the regime’s new “so-called” president, Ebrahim Raisi, who is a mass murderer and was on the death committees that carried out the 1988 massacre that I already told you about.

All the above reasons are why we say that Iran mullahs, the world’s chief executioner of women.

The women sentenced to death in Iran often come from the most deprived sectors of Iranian society. Many of them are victims of forced child marriages. Many are victims of poverty. Some commit murder in self-defense in the face of domestic violence and vicious battering by their husbands. There are also cases of self-defense against rape.

The point is that the Iranian Judiciary does not recognize any rights for women. They do not care about the motive behind murder, they just sentence them to death.

These women do not have access to defense attorney. Their own statements are not heard well in the court. In a word, these women are the most oppressed in society, and before the regime’s laws.

All the laws, the job market, the education system, the health system, everything is male-dominated. Look at the rising number of honor killings and femicides in Iran. This is a product of a patriarchal outlook promoted right from the top and institutionalized in the laws.

When looking at the clerical regime and the plight of women in Iran, we must bear in mind, that women are considered half-humans or sub-humans by this medieval regime.

The regime’s constitution views women only as mothers who have to raise their children to serve as the regime’s ideological slaves. The constitution considers women alongside men and not equal to men. They are not seen as human beings who must enjoy specific social, civil, and political rights and the Constitution does not even bother to mention that.

Therefore, women are deprived of all rights and protection in their family life. There is no government support for them when they are battered at home. They do not have the right to divorce, and when they are imprisoned, their testimonies are not heard, and they do not have access to a lawyer.