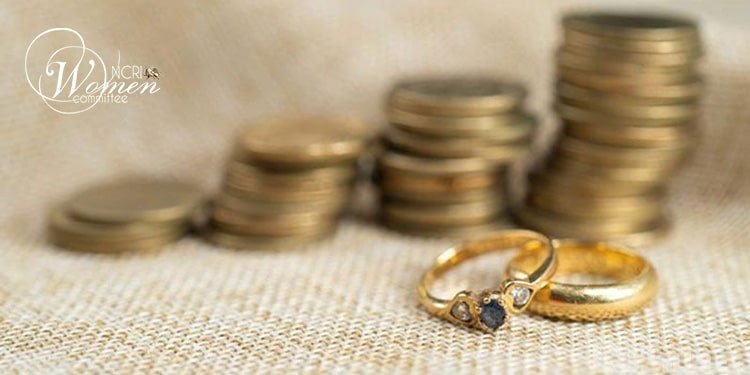 Dowry is one of the few entitlements for women, recognized even in a clerical jurisprudence. Based on this law, a woman can claim her dowry from her husband.

Over the past two years, the mullahs’ parliament passed various bills to oppress and enslave Iranian women. The parliament has now targeted women’s dowry.

In Iran, women do not automatically have the right to divorce. If they do file for divorce, they must compensate their husbands. Women’s employment and education are possible only with the husband’s permission, and women must officially receive their husbands’ permission to leave the country.

In the absence of laws that support women, dowry is the only mechanism by which women under the mullahs’ misogynistic rule can start their married lives. However, legal obstacles are taking away this only hope.

Prior to the new bill, it was already very difficult for women to claim and receive their dowries – so much so that it became a sarcastic joke in Iranian society: people would say they never saw anyone giving the dowry, nor anyone receiving it.

According to the regime’s finance laws and mechanisms to punish financial crimes, a husband’s property can be confiscated only if the property fails to meet “religious exceptions.” These exceptions include property that, by law, is “essential to maintaining an honorable social life.”

The regime has allowed this clause to serve as a legal loophole for men to avoid making dowry payments. Many men transfer their property or belongings to their relatives after their wives attempt to claim the dowries they are entitled to.

In Iran’s larger cities, from filing a dowry application to property confiscation takes 1 to 2 months. The time lag makes it easy for him to transfer the property to a different owner.

Given the staggering price of housing and the prevalence of public poverty, it is rare for families to qualify to rent a house or for a mortgage. However, in the case of mortgaged homes, they qualify for the religious exception because the property is considered necessary for the husband to maintain an honorable social life. Thus, Iranian women cannot even seize home mortgage payments in the form of a dowry.

Property found to be within the religious exceptions cannot be seized or sold. Therefore, if a woman requests the seizure of property under a religious exception, the husband can protect the property by citing that he needs to maintain his social life.

It must be noted that these considerations only apply to legislation that concerns women’s rights. In other cases, the clerical regime has no qualms about shooting Koulbars (freight carriers) and fuel carriers. The regime also ruthlessly destroys peddlers’ only means of survival and savagely demolishes the homes of female heads of households who must care for their children and elderly, disabled relatives.

New roadblocks in receiving dowry and a new tool to plunder

In May 2022, state-run news outlets reported on the decision by the Legal and Judicial Commission (part of the mullahs’ parliament) decision to ratify a bill that would allow an assessment of a man’s financial situation before imprisoning him for not paying his wife’s dowry. If approved, the bill would force women to prove that their husbands are able to pay a dowry, making the wife’s dowry-collection process even more complex.

According to Mohammad Taghi Naghdali, a member of the regime’s Legal and Judicial Commission, the Commission stipulates that if the husband requests a financial audit and can prove that he is unable to pay, he will not be imprisoned. The bill was discussed during a session on amending articles of the law on mechanisms to punish financial crimes.

Naghdali described the bill as a “very good” amendment, even though the bill could make it impossible for women to receive dowry. In these circumstances, it would be up to the wife to prove that her husband had the requisite financial capability.

In accordance with the law on mechanisms to punish financial crimes, the indebted person is always believed to be capable of paying his debts unless proven otherwise. With this bill, members of parliament, rather than obliging the debtor to pay the dowry he accepted at the time of the marriage, presume that the man is incapable of paying.

The act also represents a type of tax on dowries. The higher the amount of the dowry, the higher the tax. The action, according to this member of parliament, seeks to prevent the determination of heavy dowries.  (The state-run ISNA News Agency – April 24, 2022).

While the mullahs’ government officials have prioritized toughening dowry laws in favor of men, the legal age of marriage for girls is 13. The father and a judge can also force a girl to marry before 13. Furthermore, the bill to eliminate violence against women has been languishing for ten years and is being passed among different governmental bodies. These blatant discriminations and legal restrictions against women affect countless innocent Iranian girls – all victims.

Nevertheless, brave, and savvy Iranian women continue to identify ways to carry on with their lives. Contrary to regime officials’ claims, the measures regarding dowry are not aimed at strengthening the family. Instead, these measures are causing further tension among Iranian couples.

More importantly, the regime’s parliament is failing to take action to alleviate the rampant poverty that the Iranian people suffer – and poverty is among the main reasons for the destruction of Iran’s social fabric and reduced rates of marriage among young people.