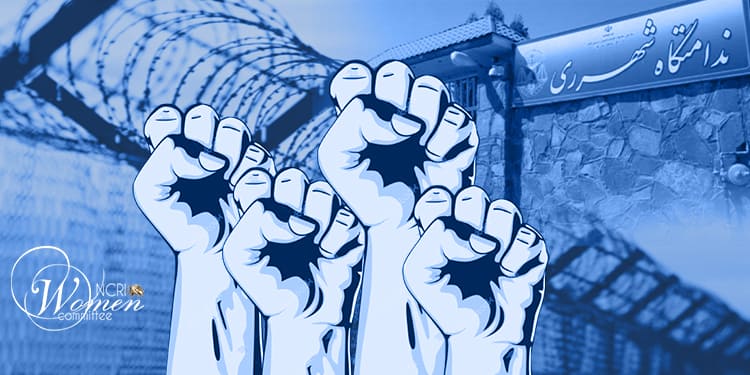 Political prisoners defied the mullahs’ Judiciary chief during his visit to the notorious Qarchak Prison on Friday, May 27, 2022.

Qarchak’s warden, Soghra Khodadadi, described Ejei as a guest. However, political prisoners cried out, “We do not want a criminal guest.”

Khodadadi, outraged, attempted to intimidate the detainees to no avail. The prisoners reacted angrily and told Khodadadi and other visiting officials to leave as soon as possible. They shouted, “You criminals, why did you start your killing machine? Why did you execute Ladan Molla Saeedi a few days ago?”

Political prisoners chanted during the abovesaid dialogue, “Death to Khamenei.”

The mullahs’ Judiciary Chief and his companions quickly left the ward of political prisoners following their protests. Ordinary prisoners also followed suit with political prisoners and told Ejei that the prison authorities did nothing for the inmates. They also objected to the bail registration system, saying no arrangements were to facilitate bail.

The Iranian state media cited mullah Ejei, the mullahs’ Judiciary Chief, as declaring, “Those criminals who do not behave properly in prison are tying the hands of the authorities to include their names in the amnesty list.” (The officials IRNA news agency – May 27, 2022)

Earlier in May, the National Council of Resistance of Iran exposed official documents and photos revealing the inhumane conditions in the overcrowded Iran prisons.

The NCRI Women’s Committee had previously published a detailed report on the disastrous conditions of women’s wards in prisons across the country. By deporting and depriving prisoners of the minimum facilities, the mullahs’ regime is trying to make the prison’s inhumane conditions worse for the prisoners.

Who is Soghra Khodadadi, the warden of Qarchak Prison?

The US Treasury Department press release said, “Soghra Khodadadi, the current director of Qarchak Women’s Prison, was responsible for ordering and directly participating in a violent attack on December 13, 2020, against prisoners of conscience in Ward 8 along with at least 20 other guards. According to publicly available reports, prison guards beat these female prisoners of conscience with batons and stun guns. Khodadadi ordered this attack in retaliation for the prisoners exercising their right to freedom of expression.

“Khodadadi is being listed by the Department of State and designated by OFAC pursuant to Section 106 of CAATSA. Qarchak Prison was publicly identified as responsible for certain gross violations of human rights under CAATSA in 2019 and designated in 2020.”