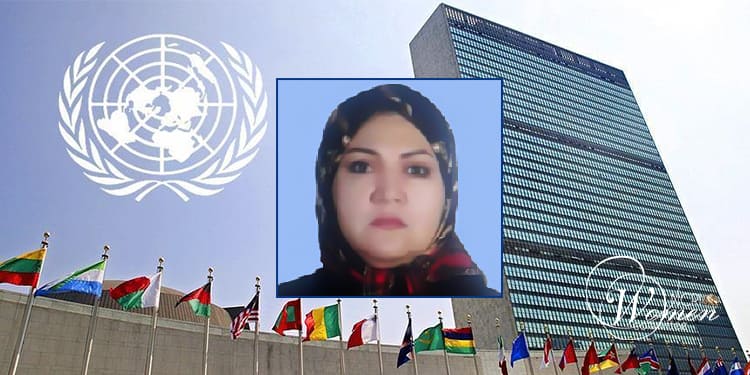 4 UN Rapporteurs wrote to the clerical regime in Iran about violating the rights of two political prisoners, Fatemeh Mosanna and her husband, Hassan Sadeghi.

Addressing Ebrahim Raisi’s Government, the 4 UN Rapporteurs gave them a 60-day deadline in which they expected a response to violations of the two political prisoners’ right to property and housing.

This letter, dated April 7, 2022, was made public and published on the UN website with a two-month delay under UN rules.

The 4 UN Rapporteurs expressed “serious concern about the arrest and conviction of Mr. Sadeghi and Ms. Mosanna and the seizure of Mr. Sadeghi’s property, which appear to be justified for their family affiliation with an alleged member of MEK.”

The 4 UN Rapporteurs said they expected to receive a response within 60 days.

“Past this delay, this communication and any response received from your Excellency’s Government will be made public via the communications reporting website. They will also subsequently be made available in the usual report to be presented to the Human Rights Council. While awaiting a reply, we urge that all necessary interim measures be taken to halt the alleged violations and prevent their re-occurrence and in the event that the investigations support or suggest the allegations to be correct, to ensure the accountability of any person(s) responsible for the alleged violations.”

The 4 UN Rapporteurs said in the letter that “after having transmitted the information contained in the present communication to the Government, the Working Group on Arbitrary Detention may also transmit the case through its regular procedure in order to render an opinion on whether the deprivation of liberty was arbitrary or not.”

According to the letter, “Mr. Hassan Sadeghi and Ms. Fatemeh Mosanna were arrested on January 28, 2013, for organizing a mourning ceremony for Mr. Sadeghi’s father, who lived in exile at the time of his death and was a member of the banned Mojahedin-e Khalq (MEK) political-militant organization. Mr. Sadeghi and Ms. Mosanna’s daughter and son, minor at the time, were also arrested along with them and were released after three and 45 days, respectively. On February 11, 2014, Mr. Sadeghi and Ms. Mosanna were released on bail with the amount of 200 million tomans. They did not have access to a lawyer of their choosing during the pretrial arrest.

“In 2015, Branch 26 of Tehran’s Revolution Court sentenced Mr. Sadeghi and Ms. Mosanna to 15 years’ imprisonment for “moharebeh” (taking up arms to take lives or property and to create fear in public) for supporting MEK and ordered the seizure of Mr. Sadeghi’s personal properties. On September 30, 2015, Ms. Mosanna was arrested and transferred to Evin Prison to serve her sentence. On February 7, 2016, Mr. Sadeghi was arrested while visiting Ms. Mosanna in Evin prison and was transferred to Rajai Shahr Prison to serve his sentence.”

The 4 UN Rapporteurs concerned over charges

The UN Rapporteurs said, “We are particularly concerned at the use of the charge of Moharebeh in this connection, and the lengthy prison sentence imposed, as it targets the exercise of individual rights for mere family relations. We furthermore express serious concern at the confiscation and risk of eviction from their home of Mr. Sadeghi and Ms. Mosanna’s family without due process in accordance with international standards. The seizure of this home would likely put at risk of homelessness the family members, as well as Mr. Sadeghi and Ms. Mosanna themselves, upon their eventual release from prison. Such evictions would be contrary to your government’s obligation to respect, protect and fulfill the right to an adequate standard of living, including housing, as well as the right to non-discrimination and the right to freedom from arbitrary or unlawful interference with one’s privacy, family and home. We are furthermore concerned that the overbroad wording of article 49 of the Constitution legalizes infringements on fundamental rights, and we call for steps taken to ensure its repeal.”

The 4 UN Rapporteurs noted in their letter, “Prior to his current incarceration, Mr. Sadeghi served six years in prison in the 1980s from the age of 15 to 21 for his alleged sympathy with the MEK. As a result of this first incarceration and the torture to which he was reportedly subjected, one of his eyes was badly damaged. Mr. Sadeghi still requires medical care for his eye.

“In 1981, when Ms. Mosanna was 13 years old, she was arrested and detained for three years along with her mother, a political prisoner. Ms. Mosanna has intestinal colitis and has been released on medical leave since May 2021.”