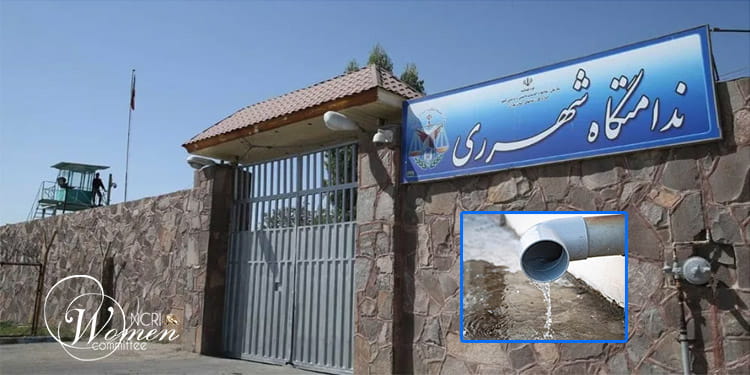 Qarchak Prison sewage has overflown the prison yard and onto the wards’ corridor. In addition to the sewage problem, drinking water is also cut off, and the prison authorities are not taking action.

Recent reports indicate that the Qarchak Prison sewage overflew on Tuesday, June 7, 2022, in the prison yard and gradually flew to cover the floors of all the yards in wards 5, 6, 7, and 8. Prisoners can no longer go to the yards to breathe fresh air, and the sewage odor has filled the prison’s space. Inmates especially feel bad during the night.

The flow of sewage on the floors in Qarchak prison, coupled with the hot weather and the lack of a ventilation system, has created respiratory problems for the women detained in these wards. It has also caused an influx of insects. Qarchak Prison authorities have not taken any action to fix the problem despite prisoners’ protests.

The overflow of the Qarchak prison sewage is dire since many inmates do not have beds and sleep on the floors.

There are problems with the Qarchak Prison sewage in the infrastructures of Ward 3.

The conditions are especially worrying in the “Mothers’ Ward,” where inmates stay with children from one to five years old. On the other hand, prison telephones are located in the yard, and prisoners who want to make calls have to walk through the sewage.

In the meantime, the prison’s drinking water is also cut off. Prisoners used to purify and boil the water and prepare it for drinking.

An informed source reported, “the overflow of Qarchak Prison sewage into the wards has attracted flies and insects. Also, the odor of Ammoniac gas is causing breathing difficulties for the women in these wards.”

The source added, “The prison’s water filtering machine has stopped working, and the food quality has also dropped.”

The situation in Qarchak Prison is an example of torture for women who were already under various forms of pressure from the prison authorities.

A report by the NCRI Women Committee glances over “the conditions of women in Iranian prisons.”

The problems in Qarchak prison include the lack of basic amenities, the sewage system, salty water, constant water shortages in the summer, lack of medical and health facilities, and overcrowded rooms.

The substandard hygiene of Qarchak Prison has been so devastating that it found its way to the state-run media.

Qarchak Prison holds about 2,000 women. This prison has no crime segregation, and political prisoners are kept among ordinary criminals and dangerous prisoners.

Many women arrested during the November 2019 and January 2020 uprisings are being held in this prison. None of them have been allowed to go on leave.

In Qarchak, some prisoners sleep on the prison floor, further contributing to spreading diseases. The number of prisoners in the halls and cells is high, and this causes a dangerous situation in the prison if someone is infected. Even addicts more susceptible to infection are not separated from other prisoners.

Another reported issue of the notorious Qarchak prison is the rape of prisoners. Prisoners convicted of violent crimes have broken the security cameras of the toilets and bathrooms and used the place to beat and rape prisoners. Despite being aware of this situation, the prison authorities do not repair or install new cameras. The prison staff also ignores the phenomenon of rape in prison.