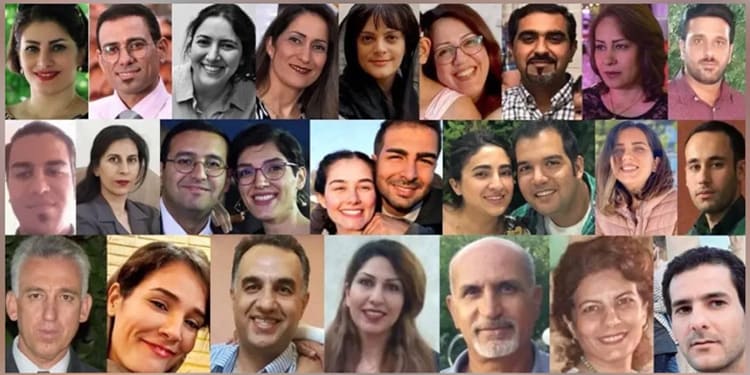 Suppression of religious minorities in Iran

The Revolutionary Court of Shiraz sentenced 14 Bahai women to 43 years in prison.

According to a verdict issued by the First Branch of the Shiraz Revolutionary Court on May 29, 2022, 26 Bahai citizens, including 14 Bahai women, were sentenced to 85 years in prison, exile, and deportation. The verdict also orders that these individuals report to the provincial Intelligence Department daily for two years.

The third hearing examining the charges against these individuals was held on May 18, 2022.

Details of the conviction of the 14 Bahai women

Yekta Fahandej Saadi, Lala Salehi, Bahareh Nowrouzi, Rezvan Yazdani, and Mojgan Gholampour were each sentenced to five years. In addition, their passports have been revoked for two years, and they cannot leave the country.

The charges against the 14 Bahai women include “assembly and collusion intending to commit a crime against internal and external security.

The court also charged them with “participating and gathering in slums and the outskirts of Shiraz and religious and tourist sites… under the pretext of examining the water crisis and social harms.” They were also accused of “advocating environmental protection and conspiracy to create intellectual and ideological insecurity in Islamic society.”

Suppression of Bahais in Iran

The clerical regime considers its Bahais to be heretics who have no religion. Rights groups say authorities routinely arrest members of Iran’s estimated 300,000-strong Bahai minority community for expressing or practicing their beliefs.

Article 23 of the mullahs’ Constitution states that “no one may be molested or taken to task simply for holding a certain belief.” However, followers of the Bahai faith are denied many fundamental rights, including access to education, employment, and political office.

The religious dictatorship has repeatedly charged and detained Bahais with national security-related offenses without disclosing evidence.

Religious minorities are systematically persecuted in Iran just because of their faith. They are deprived of many fundamental rights, including the freedom to practice religious rituals. In the case of Bahais, they are deprived of the right to education and employment.