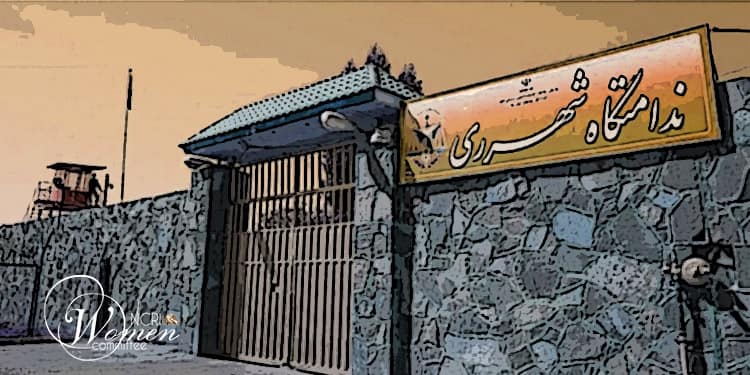 The notorious Qarchak Prison is the only women-only prison in Iran and the detention center for at least 2,000 women. This prison was a disused industrial chicken farm. Initially, it did not have the standards for a prison. The lives and health of all prisoners are in danger in the Qarchak torture chamber in Varamin. “This is the end of the world,” In other words, it is a place of torture, exile, and murder of women.

Women prisoners in Qarchak are deprived of the three vital elements for every human being: water, air, and healthy food. The Qarchak torture chamber is used as an exile for political prisoners.

According to recent reports, even the filters and the worn-out water purification system are now out of order.

Last week, prison sewage wells overflowed into all wards and their yards. This situation has exposed prisoners to various dangerous chemical pollutants, toxic air, and pollution. They are more susceptible to a variety of diseases than ever before.

The head of Qarchak Prison is a woman named Soghra Khodadadi, whose background was previously mentioned by the NCRI Women’s Committee. This woman, in collaboration with other agents of the regime’s prisons and judiciary, has created an unbearable condition for women prisoners in Qarchak Prison.

Recently, former political prisoner Soheil Arabi collected and published the reports of more than ten women prisoners in Qarchak Prison and their families about the catastrophic situation in this prison. The following article covers only parts of reality.

The wards and quarantine of the Qarchak torture chamber

Wards 1 and 2 are for convicts who commit the crime of selling or trafficking drugs.

In ward 6, convicts of financial crimes and fraud and prisoners with sentences of less than 25 years are held.

Ward 7 is where dangerous criminals are imprisoned for murder, corruption and prostitution, kidnapping, acid attack, extortion, and crimes such as human trafficking.

Political prisoners and prison workers are in ward 8.

The former counseling ward 1, known as the mothers’ ward, holds women with children, pregnant women, and some of the prison workers.

The former counseling ward 2 is the place of detention for financial convicts, the sick, and the elderly.

The quarantine of the Qarchak torture chamber is very small, and 60 people live in a cramped place.

The wards do not have windows or any air conditioning. The visitation hall is tiny and dirty.

There is a “hothouse” in every courtyard for cooking, but due to the short roof, these places have been closed, and prisoners cannot use them for cooking. The hothouses have turned into homes for cats.

In wards 1 to 7, the sink and washbasin are the same, which is a health disaster.

Health and hygiene in the Qarchak torture chamber

In recent weeks, sewage has been overflown in the wards. Odor and the accumulation of insects, poisonous tarantulas, mice, salamanders, water lizards, and insects have added to hundreds of previous health problems. Toxic tarantulas hide among the grass and thorns of the environment.

In response to the prisoners’ protest against the existence of these vermin and poisonous insects, Soghra Khodadadi said: “It is normal to have these things in prison!”

During the day, only five prisoners from each ward are visited. Ophthalmologists and dentists rarely go to prison. The ophthalmologist takes money from the prisoners for examination and gives them expensive, low-quality glasses. Women have to buy from him because they have no other choice.

The dentist also receives a lot of money for medical services; only tooth extraction is free. Due to the lack of hygiene, prisoners prefer not to see a dentist because their problem is not solved, and they also suffer from worse diseases.

There are no specialized drugs in prison, such as B-complex and B12 ampoules, burn ointments, etc. Prisoners’ families must provide most of the medicines from outside at their own expense.

They hardly do serum injections for prisoners. The serum is only injected if someone is on a hunger strike or has low blood pressure.

Nevertheless, they have a free hand in prescribing and providing sleeping pills. They never lack the budget for putting prisoners to sleep!

The prison’s psychiatrist prescribes many sleeping pills to the prisoner once she raises the problem of suicidal thoughts and that she cannot sleep at night. In this way, they put the prisoners to sleep to cut down the trouble for the guards.

About 85% of prisoners in the Qarchak torture center use neurological drugs. These drugs are taken without any medical supervision.

Most of the psychiatrists in Qarchak are prison guards who have graduated from non-attendance and low-quality universities inside the prison with less than four years without studying. Now, they work as psychiatrists.

These doctors prescribe heavy sleeping pills for the detainees and do not know anything else.

Denying medical care to the ill

In most cases, when the detainee must be transferred to the hospital upon doctor’s prescription, the head of the clinic vetoes that by a short sentence, “it is not necessary.” They do not even dispatch cancer patients to the hospital.

Putting handcuffs and foot cuffs on the patients is another torture method practiced in Qarchak.

Even for the prisoners who burn themselves in the kitchen or the boiling water unit, the prison authorities do not send them to the hospital. The only thing they do for them is to give them a sedative and a small amount of burn ointment.

The clinic’s laboratory cannot do most of the tests. The clinic hardly sends any prisoners to civic hospitals to do their tests. They will do that only if a prisoner says she will pay all the expenses for the ride and the treatment.

Most prisoners do not afford to pay these expenses.

Even if they send a prisoner to the hospital, the soldier accompanying her is in a rush to finish the job and start his second job. As a result, they usually do not wait to receive the results of ultrasound and other tests. They do not let the prisoner go through all the stages of her treatment.

The nurses’ unit is filthy. They give injections on the same bed where the previous prisoner was bleeding and is soaked with blood.

There are only two wheelchairs for some 2,000 prisoners in the Qarchak torture chamber.

Mothers and young children in prison

The prison’s warden and security prevent charity aid from reaching the mothers serving their time in prison and their children.

Prison food is not enough for mothers who breastfeed their babies. Most of the food provided by charities is intended for these mothers. But the head of the prison and its security department do not deliver these aids to the mothers.

There are no facilities for children who are detained with their mothers.

Pregnant women are detained in limbo for a long time. They do not receive clothing, either.

Conditions of women’s food in the Qarchak torture chamber

The women detained in the Qarchak torture chamber are always hungry and nervous. According to the prisons’ regulations, prisoners must have dairy, fruits, and vegetables in their diet. However, prison authorities steal the budget for prisoners’ food and do not provide these items to prisoners for free.

Some of the women have been in Qarchak Prison for ten years. They have not had any fruit or good food for all these years. Even when charities send food and fruits to the inmates, they do not reach them.

Carrots, bananas, and 90% of the foods are banned in Qarchak Prison. Instead, narcotic drugs are abundant and easily accessible. The prison’s security guards and the IRGC bring in the drugs in large amounts and sell them to the prisoners.

The drinking water in Qarchak is also salty and not potable. Inmates must purchase every bottle of mineral water for 4,000 Tomans. Many of the prisoners do not have the purchasing power to buy water.