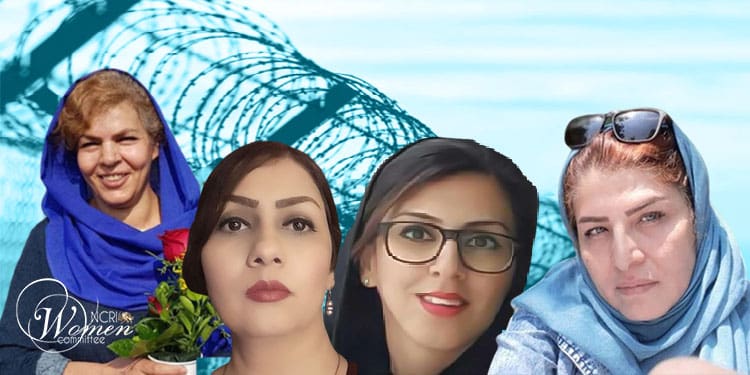 Monireh Arabshahi, Massoumeh Askari, Nargess Mansouri, and Samin Ehsani are deprived of their rights in prison

Following is an update on the situation of 4 political prisoners, Monireh Arabshahi, Massoumeh Askari, Nargess Mansouri, and Samin Ehsani.

Monireh Arabshahi, the mother of political prisoner Yasaman Aryani and a civil society activist, suffered a sharp drop in calcium levels and numb parts of her body. After this incident, she was transferred to a civic, medical center on Tuesday, June 14, 2022.

An informed source said the doctors wanted Ms. Arabshahi to be tested at the hospital every ten days as they had operated on her thyroid. But prison authorities prevented her visits to the hospital. Eventually, the authorities of Kachouii Prison only accepted her to be taken to hospital once a month.

Monireh Arabshahi had earlier been sent to Rajai Hospital on May 1, 2022, due to her deteriorating conditions.

Monireh Arabshahi and her daughter, Yasaman Aryani, must spend 5.5 years in prison for opposing the compulsory hijab. Monireh and Yasaman were transferred from Evin Prison to Kachouii Prison in Karaj on October 22, 2020.

Narges Mansouri, a political activist and a member of the syndicate of Tehran and Suburbs Bus Company workers, remains in solitary confinement after 27 days of detention.

Interrogators have severely beaten her to a point where she coughed up blood. Ms. Mansouri is also denied access to an attorney.

A source close to the prisoner said, “After being arrested in border areas, Mansouri was transferred to solitary confinement in Ward 209 of Evin Prison. Interrogators severely beat Mansouri at least once for allegedly insulting the regime’s supreme leader. She was beaten so hard that she brought up blood.”

Mohammad Moghimi, a lawyer for Ms. Mansouri, also said, “Narges Mansouri had access to the phone only once during this period. And because she was denied access to her chosen lawyer, there are no details available on the new charges against her or the torture she was subjected to.”

The official IRNA news agency claimed on May 19, 2022, that Narges Mansouri had been detained by security forces while crossing the border. IRNA reported that Narges Mansouri is accused of “having a mission to provoke public opinion by preparing fake statements and making distorted and provocative interviews aimed at creating chaos and insecurity in the country.”

Massoumeh Askari is deprived of leave

Massoumeh Askari, a political prisoner, and retired teacher, faces many violations of her fundamental rights as a prisoner. Massoumeh is denied access to medical care and rejected a leave. Ms. Askari is serving a 5-year sentence at Kachouii Prison in Karaj.

Massoumeh Askari suffers from depression and fractures to her right leg requiring surgery. She also needs the platinum in her leg to be replaced. She is the only guardian of her elderly father, who has Alzheimer’s.

Alireza, Ms. Askari’s son, had attempted suicide and needs his mother by his side.

Massoumeh Askari is a resident of Tehran but has been deported to Kachouii Prison in Karaj and held among prisoners convicted of dangerous crimes. The principle of segregation of crimes has not been applied to Ms. Askari. During her time in prison, ordinary prisoners beat her several times.

The Evin Prison Prosecutor’s Office opposes parole for Massoumeh Askari, even for temporary leave, despite spending 3.5 years in prison out of her total 5-year sentence.

Massoumeh Askari was transferred from the women’s ward of Evin to Kachouii Prison in Karaj on December 19, 2021, even though she is a resident in Tehran.

Samin Ehsani had previously helped Afghan children to access education as they are denied education rights in Iran. The court used this charge as a basis to issue her a prison sentence.